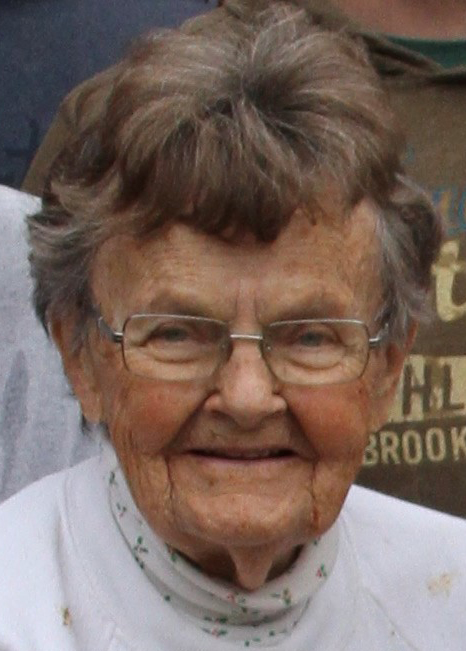 Per Barb’s wishes for cremation there will be no viewing or services. In lieu of flowers, memorials may be given to Blue Valley Cemetery Association, c/o DeVeta Brader, 1885 East Monument Road, Glenvil, NE 68941.

Barb was born May 12, 1931, in Hastings, NE to John and Alberta E. (Perkins) Spady. She graduated from Hastings High School in 1949 and attended Hastings College.

Barb worked as a telephone operator for Lincoln Telephone Company in both Hastings and York in the early 1950s. It was while working in York that she met Delon “Buck” Buchholz in 1950 when he was home on leave from the U.S. Navy.

Upon Buck’s honorable discharge from the service, the couple married on April 15, 1953, and moved to Cedar Rapids, IA. Barb worked as a bookkeeper for the local dairy until their first child, David, was born in July 1954. Their daughter, Jody, was born in September 1956. In October of that year, the couple moved to Ayr, NE, taking Barb’s father up on his offer to have Buck assume farming duties on some of the family land. Their third child, John, was born in Hastings in December 1958.

Barb took to her roles as farm wife and mother. On the farm, she was a valued partner when it came to fieldwork as well as checking rows and moving pipe during irrigation season. She frequently remarked that the farm was an ideal place to raise kids.

Barb was a certified sewing instructor for the Singer Sewing Machine Company and in the 1960s and 1970s created hand-tailored clothing for some of Hastings’ most prominent women.

Barb and Buck could be seen regularly working out at the Hastings YMCA. Even into her late 60s, Barb volunteered as a spinning class instructor at the YMCA.

The couple moved to Hastings in 2012 when Buck retired from farming.

To order memorial trees or send flowers to the family in memory of Barbara "Barb" Buchholz, please visit our flower store.