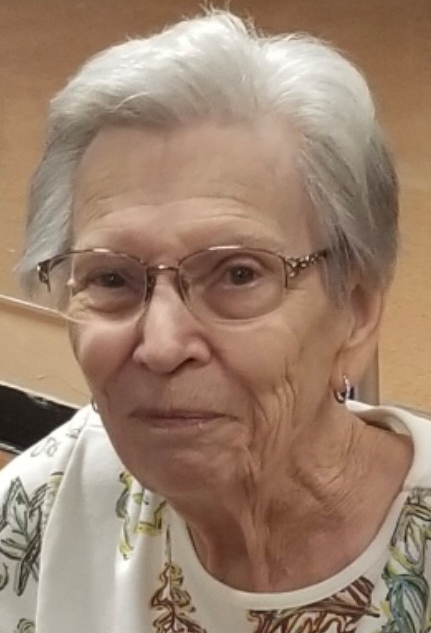 Mary was at Lakeside Hospital in Omaha, NE on January 2, 2022, when she stated “Maybe the Lord is calling me."

Mary was born on a farm near Shickley, NE to Gottlob and Edith (Overturf) Rauscher. The family moved to a farm south of Sutton in 1946 and Mary graduated from Sutton High School in 1948. After graduation, Mary moved to Lincoln where she worked at Lincoln General Hospital until she returned to Hastings to attend cosmetology school. Upon completion of the program, Mary and her mother operated a beauty salon in Geneva, NE. After her 1951 marriage, she and her husband Ray Fredricks farmed south of Glenvil, NE. Mary worked at Holiday Inn and Ben Franklin in Hastings until retirement took her to Harlingen, TX where she was active in a variety of volunteer activities. Upon returning to Hastings in 2004 Mary became a volunteer at The Ark Child Care Center at Good Samaritan Village in Hastings. Rocking babies was one of the highlights of Mary’s retirement as well as knitting dozens of baby caps for the Mary Lanning hospital nursery. Mary was a consummate seamstress and quilter having won many ribbons and prizes for her hand-quilted projects in the county and state fairs.

Mary was preceded in death by her husband, Ray; son, William; daughter, Myra; parents; and brothers, Robert and Kelly Jake.

She is survived by her sisters, Carol (Dean) Borchers of Unicoi, TN, Joan (Jerry) Rounds of Harlingen, TX, and Jewel (Neil) Staberg of Omaha, NE. Numerous nieces and nephews and other extended family and friends.

Graveside Service will be 1 p.m. Friday, January 7, at Glenvil Cemetery in Glenvil with Rev. Micah R. Gaunt officiating. There will be no viewing or visitation. In lieu of flowers, memorials may be given to Alzheimer's Association or Peace Lutheran Church.

To order memorial trees or send flowers to the family in memory of Mary Fredricks, please visit our flower store.