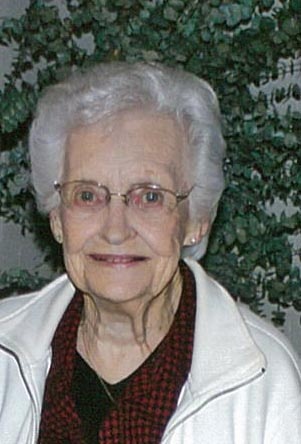 Services are 10:00 a.m. Tuesday, October 22, at First St. Paul’s Lutheran Church in Hastings with Pastor Andrea Paulson officiating. Burial will be at Parkview Cemetery in Hastings. Visitation is 6-7 p.m. Monday at the funeral home with family present, and one hour prior to service at the church. Memorials may be given to the family to be designated later.

Berdena was born on January 13, 1928, to Henry and Ollie (Hinrikus) Janssen. She married Robert Johnson May 25, 1944.  Berdena was a homemaker.  She worked at the NAD in Hastings and at the Showboat Café. She loved painting, working in her garden and enjoyed her granddaughters’ games, great granddaughters’ dancing and grandson’s racing. Berdena was a member of the Artistic Club of Nebraska where she had numerous friends.

To order memorial trees or send flowers to the family in memory of Berdena Johnson, please visit our flower store.