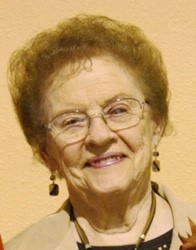 Rosary is 7:30 p.m. Thursday, January 3, at Butler Volland Chapel. Mass of Christian Burial is 10:30 a.m. Friday, January 4, at St. Michael’s Catholic Church in Hastings with Father Jeremy Hazuka officiating.  Burial will be in Parkview Cemetery in Hastings. Memorials may be given to Mary Lanning Hospice. Visitation is 9 a.m.- 8 p.m. Thursday at the funeral home, and one hour prior to service at the church.

Berniece was born November 5, 1922, to George and Minnie (Kranau) Hartman near Blue Hill, Nebraska. She was the fourth of seven children. Berniece attended rural and parochial school before graduating from Blue Hill High School in 1940 with a teaching certificate earned by completing normal training in 12 th grade. She taught three years in Webster County Rural Schools and three years in Cloverdale District #39 in Adams County and attended Kearney State Teachers College for three summers.

In 1946, she married Lawrence “Buster” Loskill at the Sacred Heart Church in Roseland. The lived on a farm near Roseland with their two children, Donald Ray and Barbara Jean from 1946-1960. Then they moved to Roseland where they purchased a farm. She was a substitute teacher in Roseland and worked in Roseland School office for 2 years. Berniece resumed her teaching career at Ayr Public School in 1958, where she taught for 30 years and attended summer school at Kearney during the 12 summer sessions until she graduated in 1970 with a Bachelor’s Degree in Education.

In 1987, she retired and became an active member of Hastings Area Retired Teachers Association (HARTA). She did oil painting and ceramics for 10 years and belonged to several Pitch Clubs, as well as Canasta and Rummikub. She and her husband enjoyed vacations to Branson, MO and seeing their children and grandchildren in Kearney, Lincoln, and Rapid City, SD.

To order memorial trees or send flowers to the family in memory of Berniece Loskill, please visit our flower store.