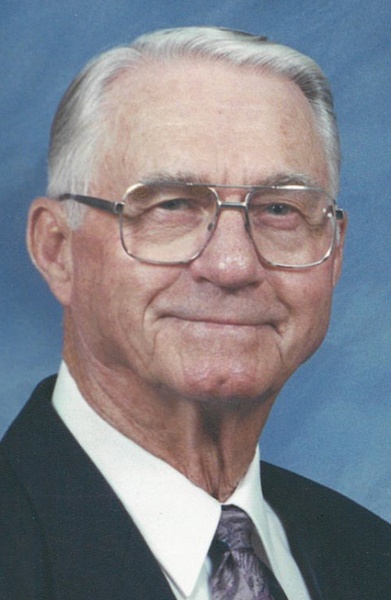 Former Ayr resident Burdette A. Schulz, 99, passed away Tuesday, July 21, 2020, at Heritage College View Assisted Living, Hastings, NE, where he was most recently a resident.

Private graveside service and burial with military rites by Hastings Military Honor Guard will be held at Parkview Cemetery in Hastings with Pastor Paul Dunbar officiating. Visitation is 3-7 p.m. Tuesday, July 28, at the funeral home. Memorials may be given to the family for a memorial to be established at a later date. Since there are material sharing restrictions, we ask that you bring your own pen for signing the registration book or memorial envelopes. If you do not bring one, we can do that for you.

Burdette was born April 20, 1921, to Albert & Clara (Bachman) Schulz on a farm near Ayr, NE. He attended Blue Hill District 51 rural school through the fifth grade, Trinity Lutheran School grades six through eighth, then attended and graduated from Blue Hill High School in 1939. After graduating he farmed with his father until October 1942 at which time he enlisted in the U.S. Army. Following basic training and prior to his overseas deployment, Burdette married Caroline Hinrichs of Glenvil on March 17, 1944, at St Paul’s Lutheran Church in Salina, KS. Shortly after they were married, Burdette served in World War II spending the next 22 months in the South Pacific. Following an honorable discharge from the Army in December 1945 he worked at the Naval Ammunition Depot for two years until he returned to farming near Ayr in 1948. He & Caroline farmed near Ayr until they retired and moved to Hastings in 1987.

Burdette was a loving husband, father, grandfather, & great grandfather to his family with many, many treasured friendships. He loved farming and being with family & friends.  We will all miss him very much.

Burdette was preceded in death by his wife of 70 years Caroline in May of 2014; parents, Albert & Clara; and brother, Marvin.

To order memorial trees or send flowers to the family in memory of Burdette Schulz, please visit our flower store.