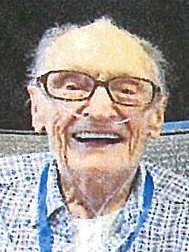 There will be no services held per Bernie’s wishes. Memorials may be given to Morrison Cancer Center.

Bernie was born February 22, 1927, in Blue Hill, NE to Walter P. & Emma (Reiber) Hartman. He was raised in Blue Hill and graduated from Blue Hill High School. Bernie started teaching when he was 17 years old. He traveled to Illinois and worked for the Cook County Court System. While in Illinois he met and married Edith Fonrobert on September 16, 1960. They spent their entire married life in the Elgin, IL area. He taught for 30 years at Abbott Middle School in Elgin, IL. They moved back to Nebraska in 2017.

Bernie liked to read and listen to classical music. He had an amazing green thumb and loved gardening and growing house plants. He especially enjoyed watching the news on TV and playing the piano. He and his beloved Edith spent a lot of time traveling to many places around the world.

Bernie was preceded in death by his parents and sisters, Helen Blum and Norma Owens.

To order memorial trees or send flowers to the family in memory of Burnell "Bernie" Hartman, please visit our flower store.