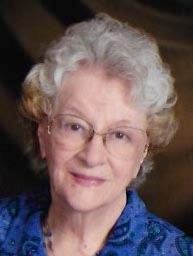 Memorial Service is 11 a.m. Wednesday, July 3, at First Presbyterian Church in Hastings with Rev. Damen Heitmann and Rev. Dr. William Nottage-Tacey. Private family burial will be at Parkview Cemetery in Hastings. In lieu of flowers, memorials may be given to First Presbyterian Church or Hastings Public Library. There will be no visitation or viewing.

Darleen was born April 26, 1926, near Loup City, NE to Alonzo Throckmorton and Lyal Cramer. She graduated from Loup City High School in 1943. In Loup City, she worked at the First National Bank and visited the library almost every evening. She moved to Lincoln, NE where she worked at the First National Bank and met her husband, Robert G. Howard at the First Presbyterian Church. At church she sang in the choir and cooked for young people; she said that she didn’t know how to cook but “they didn’t fire me.” She and Bob Howard were married there on June 13, 1954.

Darleen was Bob’s first dental assistant when he started his dental practice after moving to Hastings, NE that year. Darleen was always a “book person,” and was widely read in topics of science and European history. Darleen was a fan of watching Jeopardy and was always to be seen at her dining room table with the New York Times crossword puzzle (which she did in pen). She worked in Hastings as the Treasurer for the Community Concert Association, and for Meals on Wheels, the Hastings Public Library, and Books by Mail, and the Binderup Book Store. She was a founding member of the La Danza dance club, and a member of P.E.O. Chapter DA, the P.T.A., the Writer’s Club, the Literary Club, and at First Presbyterian Church in Hastings was a Deacon, member of the Church Circle and Chancel Choir, and leader of the prayer chain. She is well-remembered by all who knew her as a person of intelligence, an often surprising, ironic wit, and generosity.

Darleen was preceded in death by her parents, her husband, Bob, and her two brothers, Lynn and Carl Throckmorton.

To order memorial trees or send flowers to the family in memory of Darleen Howard, please visit our flower store.