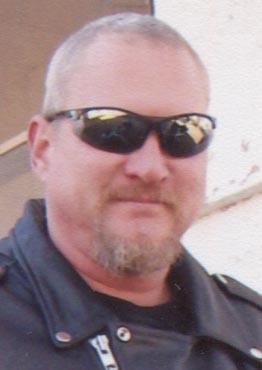 Hastings resident David Langenberg, 58, passed away at his home on Thursday, June 27, 2019.

David’s biker friends will be accompanying his ashes for his “Last Ride” to his final resting place, Highland Cemetery in Bertrand, NE. Graveside services will be conducted at 11 a.m. Saturday, August 3, by Rev. Darrel Wissmann where family and friends are encouraged to attend. A celebration of life and reception will follow at the Bertrand Community Center. Memorials may be given to the family for a memorial to be established at a later date.

David Wayne Langenberg was born on April 12, 1961, in Lexington, NE to LaVern & Shirley (Meyer) Langenberg. He was confirmed at Hope Lutheran Church in rural Smithfield, NE. David was a proud Bertrand Viking, graduating from Bertrand High School, Class of ‘79. He was Class D State Champion wrestler at 105lbs with a record of 29-0 his senior year. He attended Central Community College following high school, majoring in welding. He was an irrigation welder for Hastings Irrigation for 16 years, 1979 to 1996. He was then a journeyman plumber and pipefitter for Snell Services from 1996 to 2015.

David’s motorcycle friends will miss gathering in David’s driveway before heading out on rides. He was an avid Harley Davidson enthusiast who attended the Sturgis rallies and was a proud member of the Patriot Guard Riders. He had a very special bond with his mother, who at 79 years old, still went to Sturgis with him! David was a long-time resident of Hastings, since 1979, where his neighbors were also like his family. He could be remembered walking with his grandkids: Holly, Cash, and Bella around the block and stopping to help his neighbors out. David could also be found watching the western channel, which he had on all of the time! He also loved listening to music, working on projects and helping others. Breanna’s favorite memory is when “I was in elementary school Dad would pick me up on early out Friday’s on his motorcycle. I always thought he was super cool! We would ride on the Harley to the Alda truck stop to get pie and ice cream!” Chris recalls, “Dad taught us how to be a good worker…to go to work every day and do whatever you are asked to do, to the best of your ability.” Sarah will always remember her Dad saying, “too tough for some but just right for me.”

Those left to cherish his memory are his mother, Shirley; brothers, Brian (Beth) Langenberg and Tim (Deb) Langenberg all of Bertrand, NE; and David’s children: daughter, Sarah Kort (grandchildren, Holly and Cash), son, Chris Langenberg, and daughter, Breanna Partridge (grandchild Bella) all of Hastings, NE; and many nieces, nephews, and cousins.

To order memorial trees or send flowers to the family in memory of David Langenberg, please visit our flower store.