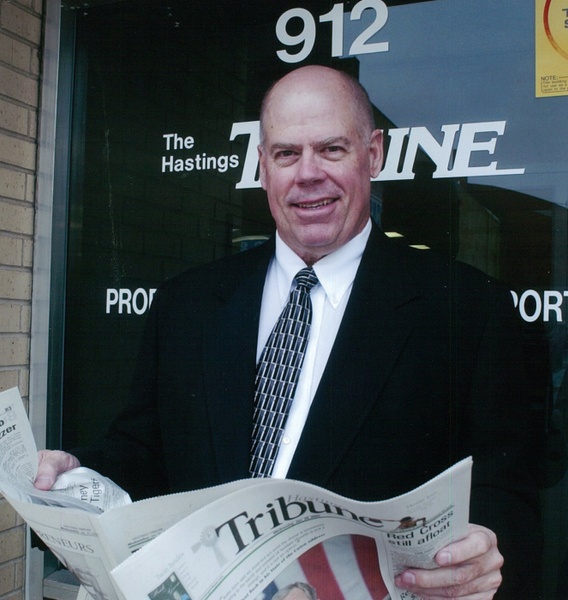 Services are 10 a.m. Friday, November 2, at French Memorial Chapel (Hastings College) in Hastings with Rev. Dr. Lee R. Wigert officiating. Burial will be at Parkview Cemetery in Hastings. In lieu of flowers, memorials may be given to Hastings Police Foundation, Hastings Goodfellows, or Hastings Community Foundation. Visitation will be 1-7 p.m. with family present 5-7 p.m. Thursday at the funeral home, and one hour prior to service at the church.

Don, born Dec. 28, 1940, was the son of Fred and Gladys Seaton of Hastings. He grew up in Hastings and attended Longfellow Elementary School. He graduated in 1959 from the Bullis School in Washington, D.C., where his father served in the U.S. Senate and later with the President Dwight D. Eisenhower Administration.  Don later graduated from Hastings College with a bachelor of arts degree.

Don was publisher of the Hastings Tribune from 1974 to 2010. Before that, he became the Tribune’s associate publisher in 1971. He began his newspaper career at the Tribune as a telegraph editor in 1967.

His community involvement in Hastings included service on the Hastings College Board of Trustees and on the boards of the Hastings Economic Development Corp., Mary Lanning Healthcare, the Area Planning and Zoning Administration, Hastings Corp., Norwest Bank, Hastings Museum and the Hastings Family YMCA.

He also served as vice president and secretary-treasurer of the Nebraska Outstate Daily Publishers Association.

Don was preceded in death by his parents.

Survivors include his wife, Nancy, of Hastings; son Andrew Seaton and his wife, Stacey, of Denver; grandsons Ryan and Adam Seaton of Denver; and sisters Chris Epp of Henderson and Monica Seaton of Dodge City, Kansas.

To order memorial trees or send flowers to the family in memory of Donald "Don" Seaton, please visit our flower store.