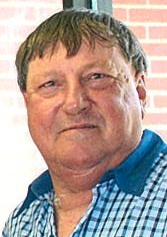 Rosary will be 9:30 a.m. with Mass of Christian Burial to follow at 10 a.m. Saturday, December 18, at St. Cecilia Catholic Church in Hastings with Father Christopher Kubat officiating. Burial will be at Sunset Memorial Gardens Cemetery in Hastings. Visitation will be 1-7 p.m. Friday with family present 5-7 p.m. at the funeral home. Memorials may be given to St. Cecilia or Adams Central.

Donnie was born August 16, 1959, to Enos “Jim” & Jeanette (Trausch) Svoboda in Grand Island, NE. He graduated from Adams Central High School in 1977, graduating at semester because as he put it “he was just that smart.” In reality, it was to help his father on the farm after recently being diagnosed with cancer.

Donnie met his future wife DeNeeta Bennett Svoboda cruising Burlington with her best friend Cheryl when DeNeeta was 17. This started a three-year courtship that united them in marriage on June 5, 1982, at St. Cecilia Catholic Church. To this marriage, they welcomed their first child Wes in 1983 and their second child Dan in 1988.

Donnie worked for Midwest Plumbing in high school then went on to work at Zuber Company Scrap Metal for the next 11 years. In 1988, his brother Kenny asked him to join the Svoboda Plumbing business. After Kenny’s passing in 2001, Donnie continued his own business with Greg at his side. Donnie worked the business until his death and it will be carried on by family. Donnie was most proud of the fact that this business thrived on word of mouth. Donnie was a very strong, hard-working man who truly loved his family, his grandkids, and riding in his Gator around the property to inspect things on a regular basis. Donnie could be found in his shop on a nightly basis drinking a beer or having breakfast at The Diner with his brother, Dave. Donnie loved farming and his Huskers, most importantly volleyball and football, in that order. Donnie was loyal, very intelligent, proud of his two sons, and stubborn to a tee. Those qualities all helped mold this family into what it is today.

To order memorial trees or send flowers to the family in memory of Donald "Donnie" Svoboda, please visit our flower store.