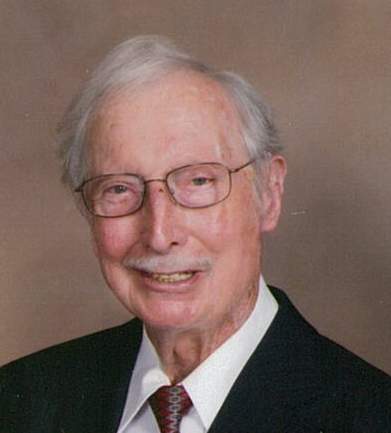 Due to COVID-19 directed health measures, a private service will be held with burial at Juniata Cemetery in Juniata. Visitation is 1-6 p.m. Monday, May 11th at Butler Volland Funeral Home. We will be in compliance with the CDC guidelines of 10 people gathering at a time for visitation, your cooperation is appreciated. In lieu of flowers, please make a contribution to your favorite charity in honor of Dr. John L. McBride.

John was born on October 27, 1928, to Hugh and Mary (Henderson) McBride in Hastings, NE. After graduating from Hastings Senior High School, he joined the U.S. Army and served in Japan for two years. Upon his honorable discharge in 1947, he attended the College of Optometry in Chicago. He set up his Optometry practice in downtown Hastings, NE in 1951. He married Janice Phillips on September 22, 1967, and adopted three sons from a previous marriage. His Optometric practice flourished and in 1972 he planned and built the McBride Vision Clinic on 12th Street. He retired in 2006 but continued to attend Optometric Conferences for continuing education to keep his medical license up to date.

John loved being an eye doctor and devoted 55 years to helping people with their vision. Over the years many of his patients who moved away as far as California would fly back to Nebraska just to have him check their eyes. Every Tuesday he loaded his car with case histories and frames and traveled to a second office in nearby Sutton to examine patients in that community for 50 years. John and Jan were Grand Marshalls of a recent Veterans Day Parade. He was a member and served as Editor of the Nebraska Optometric Association’s Newsletter for many years. He also belonged to the Veterans of Foreign Wars where he served as chaplain.

John was a lifelong, avid fisherman. Many were the time, after attending services at First United Methodist Church, and after lunch he would pile the family into the car and go for a drive, to enjoy the time off and he always kept several fishing rods and a tackle box in the trunk so he could stop at his favorite out of the way rivers and ponds to put a line in for a couple of hours (much to the chagrin of the kids).

When the boys joined Boy Scout Troop 192, they pestered him to go on a father-son campout. He loved it so much he joined the scouts to camp and go fishing and help all the kids achieve Merit badges and advancement up the ranks, to Eagle Scout.

John was preceded in death by his parents, Hugh and Mary McBride; brothers-in-law, Kendall Ham and Gayle Phillips.

John is survived by his wife of over 52 years, Janice, of Juniata; his three children, Tom of Lincoln, David (partner Jetta Adams) of Kearney, and Mark of Lincoln; grandchildren, Michelle and Kegan; his sister, Margaret “Marge” Ham, of Sutton; nieces, nephews and a host of friends.

To order memorial trees or send flowers to the family in memory of Dr. John McBride, please visit our flower store.