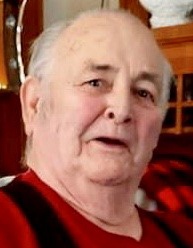 Rosary will be 6 p.m. Sunday, February 20, at Butler Volland Chapel. Mass of Christian Burial will be 10 a.m. Monday, February 21, at St. Cecilia Catholic Church in Hastings with Father Christopher Kubat officiating. Burial will be at Parkview Cemetery in Hastings. Visitation will be 1-6 p.m. Sunday at the funeral home and one hour prior to service at the church. Memorials may be given to the family for a memorial to be established at a later date.

Curt was born December 27, 1939, in Madison, SD to Clifford & Marie (Oltmanns) Moeller. He attended grade school in Madison until moving to Kenesaw, where he graduated in 1959. Curt married his high school sweetheart, Julia Porterfield, and they resided in Kenesaw. After their retirement, they moved to Hastings.

Curt was a heavy equipment operator and later owned his own over-the-road trucking business. After retirement, he still did some random dirt work in and around the community. He was a member of St. Cecilia Catholic Church, Knights of Columbus, and Elks Lodge.

To order memorial trees or send flowers to the family in memory of Dwane "Curt" Moeller, please visit our flower store.