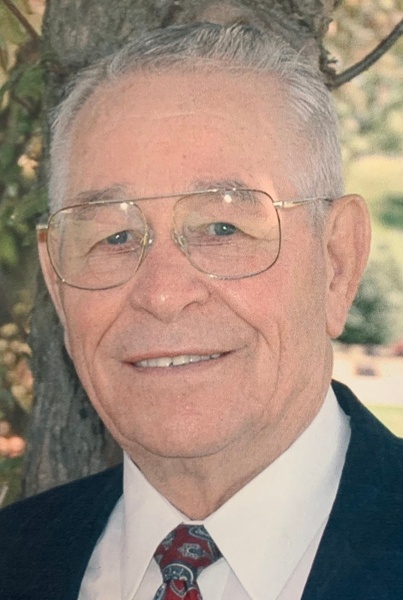 Ed was born on September 5, 1924, in Humphrey, NE, and spent his childhood in Humphrey. He served in the U.S. Army as a paratrooper in World War II. After returning home, he married Beatrice Elaine Steinhoff on June 7, 1947.

Throughout his life, he was an excellent salesman at various different companies. In 1978 he opened up a successful kitchen cabinet business, E-Z Kitchens in Hastings, NE which is still a family-run business today.

Over their 64 years of marriage, Ed and Elaine always had an open home and open hearts, making everyone feel like family. They passed on a rich legacy of hospitality to their 11 children and 40 grandchildren. Ed was a faithful, committed, and devoted husband. He was a man of integrity, honor, and hard work ethic. He had an excellent sense of humor, a twinkle of mischievousness, a hearty singing voice, an endearing streak of stubbornness, and a love for dancing with his daughters and granddaughters. Throughout his life, he had a deep devotion to God and in his later years, he had a strong, heart-felt desire to share his faith in Jesus Christ with others.

Celebration of Life is 10:30 a.m. Tuesday, December 17, at All Saints Chapel – Good Samaritan Village in Hastings with Pastor Dale Phillips officiating. Burial with military rites by Hastings Military Honor Guard will be at Parkview Cemetery in Hastings. Visitation will be 6-8 p.m. Monday with family present at the funeral home, and one hour prior to service at All Saints Chapel. In lieu of flowers, Ed requested memorials be given to The Exodus Road (theexodusroad.com).

To order memorial trees or send flowers to the family in memory of Edward Zach, please visit our flower store.