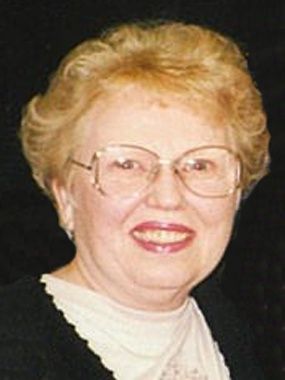 Eileen Ryan Schneider Boller of Hastings, Nebraska was called to eternal rest on February 20, 2022. She passed away peacefully at age 87 at Providence Place, surrounded by family members.

Rosary will be 6:30 p.m. Thursday, February 24, at St. Cecilia Catholic Church. Mass of Christian Burial will be 10 a.m. Friday, February 25, at St. Cecilia Catholic Church in Hastings with Father Christopher Kubat officiating. Burial will follow the mass at Holy Family Catholic Cemetery in rural Heartwell. Visitation will be 5:30 – 6:30 p.m. with the family present Thursday, February 24, at the church. It was Eileen’s wish that any memorial tributes, in lieu of flowers, be made in the form of a charitable donation to Catholic Social Services, scholarships for students at Hastings Catholic Schools, and the Holy Family Catholic Church in Heartwell. The service will be live-streamed on Livingston Butler Volland Funeral Home’s website. To view the service go to Eileen’s obituary and click the play button shown towards the bottom of the page.

Eileen Patricia Ryan was born on May 18, 1934, in Saint Mary’s Hospital in Kansas City, MO. Her parents were Maurice and Eileen (Harris) Ryan; she had one sibling, Maurice Jr. Her father was employed by the Santa Fe Railroad. In December 1941, the family relocated to southern California on two weeks’ notice as Maurice was summoned there to assist the organization of the Santa Fe’s efforts on troop transportation. The family settled in Alhambra.

Eileen graduated from the Ramona Convent Secondary School in 1952 and attended Woodbury University in Los Angeles. On November 28, 1953, she married Donald R. Schneider, a farmer from Heartwell, NE, who was serving in the Marine Corps. Following his military discharge, the couple returned to Nebraska, residing for a brief time in Kenesaw, and later moving to the Heartwell area.

The marriage was blessed with seven children. Eileen was an active parishioner of the Holy Family Catholic Church in Heartwell, where she taught religion classes, sang in the choir, played the organ, and was a member of the Altar Society. She also was active in diocesan meetings including president of the Hastings Deanery Council of Catholic Women, a board member of Lincoln Diocesan Council of Catholic Women, and a member of Catholic Daughters of the Americas. She served on the Norman School Board, the Kearney County Election Board, and the American Legion Auxiliary.

In April 1975 her husband died following a lengthy battle with heart disease. Eileen bravely went forward as a single mother, with seven children aged 3 to 20 (obtaining her first driver’s license at age 41!). On April 25, 1980, she married Bernard Boller from Red Cloud. They lived on the Heartwell farm until moving to Hastings in 1998. For many years she and Bernard would spend several weeks in Texas each winter visiting her brother and his wife.

Eileen was a prolific writer of letters, an enthusiastic pinochle player, and a landscape designer. She loved nothing better than to preside at large family gatherings, whether summer barbeques or Christmas celebrations. She also greatly enjoyed attending countless baseball, football, basketball, track, hockey, cross country, wrestling, soccer, and volleyball events, as well as school plays, dance recitals, and concerts, of her children and grandchildren. Throughout her life, she was an active volunteer, baking monthly birthday cakes for the Bethany Home in Minden, assisting at the Catholic Social Services in Hastings, and at the Mary Lanning Hospital where she was a life member of the Auxiliary. She was also a volunteer with the Master Gardener program and the American Red Cross.

To order memorial trees or send flowers to the family in memory of Eileen Boller, please visit our flower store.