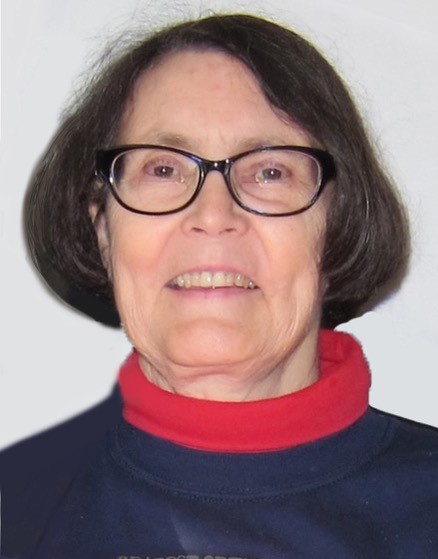 Memorial service is 11 a.m. Friday, February 7, at First United Methodist Church in Hastings with Pastor Greg Lindenberger and Pastor Joel Remmers officiating. Private family burial will be held at a later date. Book signing will be 9 a.m. – 5 p.m. Thursday at the funeral home. In lieu of flowers, Elaine has requested any memorials be made to the Elaine Lamski Memorial Student Foreign Travel Fund. For ease of donating to the fund please go to: https://hastingspublicschools.org /foundation/[hastingspublicschools.org] Instruction: Scroll to the middle of the page, on the left hand side click on the “donate” button. Fill in the amount you would like to give and earmark your memorial for Elaine Lamski Memorial Student Foreign Travel Fund.

Elaine was born on April 8, 1944, in Waco, Texas, to Jim Morgan Cross, a young Army Air Corps flight instructor, and Margaret L. Thompson Cross, a new homemaker. She lived in Waco until age 7 when her family moved to London, England. After 3 years her father was transferred to St. Louis University where the family spent four years.

The next move was back to Texas where Elaine would spend her high school and college years. Following graduation from Texas Tech in December 1966, Elaine joined the newly formed Peace Corps and was assigned to Nigeria where she taught French. It was during her time in Nigeria (1966) that Elaine met Dale, also a Peace Corps volunteer at the time. Civil war broke out in Nigeria, and Elaine was re-assigned to Tchad. Tchad was a French speaking country, so this time Elaine was teaching English to French speaking children.

Dale left Nigeria in 1967 at the completion of his tour, but he and Elaine were reunited in 1968 when Elaine was aiding in the training of new Peace Corps volunteers at Dartmouth University. Elaine and Dale were married on April 5, 1969, in Abilene, Texas.

In 1970 they moved to Lubbock, Texas where Elaine completed her Master's Degree. Later that year Elaine and Dale moved to Lincoln where Dale continued his law studies. They moved to Hastings in 1973 where Elaine was hired to teach for Hastings Public Schools. They purchased their first home at 805 N Lincoln and remained in that home to raise their two sons, Todd (1969) and Aaron (1971). In 1996 the Lamskis relocated 4 blocks north to their present residence, 1134 North Lincoln.

During Elaine’s twenty-nine year career with Hastings Public Schools, she taught English, German, Spanish, and her beloved French. She shared her love of French by arranging multiple tours of France for her students and introduced many young people to the culture and history of the country. On one occasion, Elaine took her students for dinner at a French restaurant in Omaha. A philanthropist who was dining in the restaurant was inspired by her enthusiasm and creativity. He offered to establish a trust for students traveling abroad. Over the years many students received aid from this endowment.

After her retirement from HPS, Elaine enjoyed sharing her love of France and the French language with students at Hastings College. She continued to acquaint students with the customs, architecture and people of France and what she called the beautiful language. Elaine’s impact on students, regardless of whether they were in her French class or friends of her sons, has been life long.

Elaine’s legacy will continue to impact students through her autobiography, The Book of Elaine . Her book was originally written for her children and grandchildren, but many have expressed interest in purchasing a copy in order to read about her colorful life. Elaine has requested that any proceeds from the sale of the book should be used to add to the Hastings Public Schools Foundation earmarked expressly for the foreign travel fund (see information for contributions above).

Elaine is survived by her husband of 50 years, Dale F. Lamski, as well as two sons; Todd Lamski  (Maureen and children Elizabeth, Sarah, and Morgan) of Lincoln; and Aaron Lamski (Julie and children Maggie, Gracie, Charlie, and Ruby) of Omaha. Elaine is also survived by a sister Margaret C. Counts and two brothers; Jim M. Cross and Kermit Dalton Cross. She was preceded by one sister Carolyn Cross Giles, and her parents Jim M. Cross and Margaret L. Thompson Cross.

To order memorial trees or send flowers to the family in memory of Elaine Lamski, please visit our flower store.