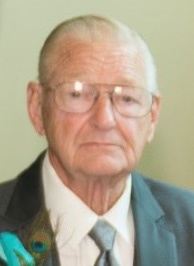 Eldon L. Albers, 83 years old, of Hastings, passed away Thursday, March 11, 2021, at Mary Lanning Healthcare in Hastings surrounded with family by his side.

Services are 1:30 p.m. Wednesday, March 17, at Livingston Butler Volland Chapel in Hastings with Pastor Roger Hammond officiating. Burial with military rites by Hastings Military Honor Guard will be at Parkview Cemetery, Hastings, NE. Visitation will be 1-7 p.m. Tuesday with family present from 5-7 p.m. at the funeral home. Memorials may be given to the family to be designated at a later date. The service will be live-streamed on Livingston Butler Volland Funeral Home’s Facebook page, the direct line for that page is www.facebook.com/lbvfh . The direct link for that page is, the link will not be live until five minutes before service time. For the health and safety of others face masks are required for those attending the visitation and funeral, your cooperation is appreciated.

Eldon was born January 11, 1938, near Sterling, Nebraska to Elywn and Verna (Boden) Albers.  He graduated from Hastings Senior High School class of 1955.

From 1956 to 1959 Eldon served in the United States Navy, during which he was stationed at United States Naval Receiving Station on Long Beach, CA on the USS Lucid (MSO-458) Minesweeper.  He made a rate of Engineman Second Class in just two and a half years, which is noted as being a difficult task to obtain. Among his accomplishments during his time of service are receiving the award of Good Conduct Medal and the China Service Medal.

After knowing one another for a number of years Eldon married his wife of 48 years, Vernabeth (Scheideman) on June 23, 1972. The couple decided to elope and were married in Las Vegas, NV at the Little Brown Chapel. The two spent many wonderful years together making memories and taking adventures on their own and with their daughters and grandchildren.

In 1944, Eldon began his life’s work as a mechanic. He began working on cars at his father’s shop, Albers K-F Motor Company, and at Bob and Al’s Auto Salvage (Mid-City Auto).  After discharging from the Navy, Eldon was hired as a mechanic at Laird Motors.  He then began work at Jerry Spady’s Dealership where he started as a mechanic before working up to service manager.  All of this experience was building towards accomplishing one of his dreams; to own and operate his own shop. Then, in December 1984 the opportunity presented itself. Eldon purchased what used to be a car lot and gas station on the corner of South Street and Elm Street.  He then started the business many of us know and remember as Eldon’s INC Automotive Specialist.  His shop began with two bays and a gas station and grew with the addition of two bays to service and repair automobiles.  Eldon’s INC sold gasoline until 1987 when it transitioned to a service and repair shop.  In 2000, the repair shop grew a bit more with the addition of two more service bays on the East side of the building, making a total of six bays.  Eldon owned and operated Eldon’s INC until 2015, proudly providing service to the Hastings community. After his years of owning and operating Eldon’s INC. Eldon focused on another passion of his, vehicle restoration. He spent as much time as his body would allow under the hoods of classic vehicles at Jackson’s Car Corner, and sometimes in his own home garage. Eldon’s diagnostic capabilities were unmatchable. He was truly a master of his craft and will always be veered as one of the very best mechanics and people anyone could hope to know.

Aside from diagnosing, repairing, and maintaining vehicles, Eldon also enjoyed several pastimes. One of his pastimes was competing in drag racing.  Eldon took to the track with his 1956 Corvette.  Some of the features on the 1956 Corvette were designed by Eldon himself.  The 1956 Corvette received first place many times over.  In 2014 he raced his 1960 Comet, which was designed completely and totally by Eldon.  Another pastime he enjoyed was traveling throughout the United States with his family.  The family took a number of vacations where they made many incredible memories. While working and maintaining his business Eldon also found himself involved with his daughters’ dance studio, designing and building sets for the stage. Among the many things, Eldon enjoyed spending his time doing was woodworking and sharing his knowledge with others; of which he had so much.

Eldon was an incredible man who has left behind an incredible legacy. Those left to cherish his memory include his wife, Vernabeth Albers of Hastings; children, Tricia Weseman of Hastings, DeEtta (Lance) Conklin of Hastings, and Kathleen (Chris) Smolik of Fort Benning, GA; sister, Joyce (Bill) Portz of Allen, Texas; grandchildren, Andrew Conklin, Kierstin Conklin, Tyler Weseman and Lizabeth Weseman; niece, Kim (Portz) Garette; nephews, Kelly Portz and Craig Portz; as well as many other relatives.

He was preceded in death by his parents and son-in-law, Kurt Weseman.

To order memorial trees or send flowers to the family in memory of Eldon Albers, please visit our flower store.