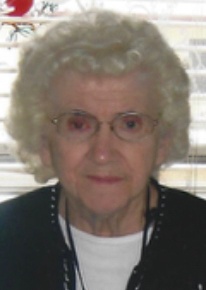 She was born on August 23, 1930, at the Blue Hill Hospital to Edward and Anna (Sommerfeld) Meyer. She attended Trinity Evangelical Lutheran School and then attended Blue Hill High School.

Elva June and her sons moved to Blue Hill in 1956, where she lived until 2010 when she moved to Hastings. In 2014, she relocated to Kearney.

In Blue Hill, Elva June worked for one year as the custodian at Trinity Lutheran School.  She then worked at the Crocker Nursing Home, the Blue Hill Leader (as a typesetter and proofreader), and the Blue Hill Care Center. She was a member of Trinity Lutheran Church, where she was confirmed on May 14, 1944, and was active in Ladies Aid. Although she enjoyed gardening, baking, and playing cards, her greatest pleasure was spending time with her family.

To order memorial trees or send flowers to the family in memory of Elva Jacobitz, please visit our flower store.