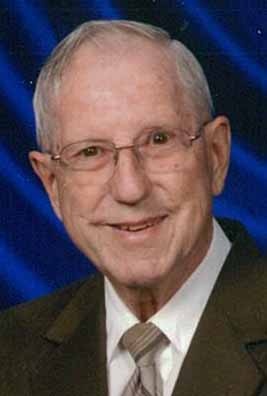 Rosary is 10 a.m. and Mass of Christian Burial will follow at 10:30 a.m. Monday, December 2, at St. Michael’s Catholic Church in Hastings with Father Jeremy Hazuka officiating. Burial with military rites by Hastings Military Honor Guard will be at Parkview Cemetery, Hastings. Memorials may be given to St. Michael’s Catholic Church. Visitation is 1-8 p.m. Sunday with family present 6-8 p.m. at the funeral home, and one hour prior to service at the church.

Gene was born December 16, 1926, in Roseland, NE to Henry “Rick” and Matilda “Tillie” Weber. The family moved to Holstein in 1929. He graduated from Holstein High School in 1944 and attended Coyne Electrical School in Chicago, IL and received his diploma at age 17. Gene joined the U.S. Navy and served in the SeaBees as an electrician on the island of Okinawa until the end of World War II. He then worked for Hunt Electric and the City of Hastings electrical department until September of 1957. At that time he purchased Bentz Photography Studio in downtown Hastings and changed the name to Weber Studio. He owned and operated the studio for 40 years until his son-in-law, Roger Ahlers took over operations.

Gene restored a 1953 Hudson Wasp and some of his other hobbies included flying, golf, traveling, and ballroom dancing. He was a member of St. Michael’s Catholic Church. He was a member of the American Legion from 1944 to the present, Knights of Columbus Third Degree, Veterans of Foreign Wars, Eagles Aerie #592, Southern Hills Country Club, Antique Car Club, and the Lions Club. He held a pilot's license for 50 years, owning and operating several planes and a helicopter.

Gene married JoAnne Wyman on May 23, 1953, at St. Cecilia Catholic Church in Hastings, NE. They had two daughters, Virginia “Ginger” and Julie.

Gene was preceded in death by his parents, Rick and Tillie Weber; and brother, Jerry Weber.

To order memorial trees or send flowers to the family in memory of Eugene "Gene" Weber, please visit our flower store.