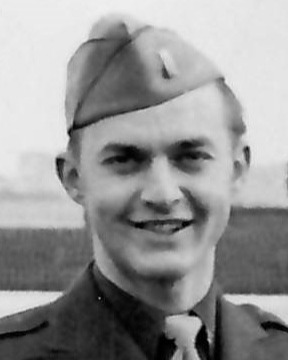 Services will be 11 a.m. Friday, November 4, at Butler Volland Chapel in Hastings with Pastor Jay Towell officiating. Burial with military rites by Hastings Military Honor Guard will be at Parkview Cemetery in Hastings. Visitation will be 10:30-11 a.m. before the service at the funeral home. Memorials may be given to the Adams County Historical Society, Start Over Rover, or the Hastings Military Honor Guard. The service will be live-streamed on Livingston Butler Volland Funeral Home’s website. To view the service, go to Floyd’s obituary and click the play button shown towards the bottom of the page.

Floyd was raised in Hastings, NE in a house built by his father. He was one of nine children and money was always tight. Most of the children worked outside the home at an early age to help supplement the family income. Floyd started his first job as a Hastings Tribune newspaper carrier while still in grade school. While in high school he was employed at Ben Sherman’s clothing store. He graduated from Hastings High School in 1942 and moved to California to work at a model airplane factory. He later moved back to Hastings in order to work at the Naval Ammunition Depot though he had to get his mother’s permission to do so as he was not 18 at the time.

The United States was in the middle of World War II so after turning 18 Floyd and a friend drove to Omaha to enlist in the Army Air Force. Both he and his friend would eventually become pilots. Floyd received his pilot wings in August of 1944 and was later deployed to the European Theater as a C-47 pilot. He flew troops and cargo and co-piloted a glider for Operation Varsity, the final airborne assault over the Rhine River where he briefly experienced ground combat.

After the war, he continued to fly supplies and personnel across the United Kingdom and Continental Europe. He returned to the United States in December 1946 and enrolled in Hastings College. While in college he worked as a part-time flight instructor and also volunteered to fly relief supplies during the Great Blizzard of 1949. He remained in the Air Force Reserves until 1957 and was released from service as a Captain.

Floyd met the love of his life, Phyllis Mae McWhirter, on a blind date arranged for by friends. They were married on March 19, 1950, and were together for almost 72 years. After Floyd received his Bachelor's degree from Hastings College he and Phyllis moved to Petersburg, NE where he served one year as principal and two years as superintendent. In 1954 the family moved to Oshkosh, NE where he was the high school principal for ten years and superintendent for four years. While in Oshkosh he obtained a Master's degree from the University of Nebraska.

In 1968 Floyd returned to Hastings to be closer to family and took a teaching position with Hastings Public Schools. He retired from the school in 1988. After retiring Floyd became involved in numerous volunteer activities. He and Phyllis became members of the Hastings YMCA where they participated in many older adult activities. He was also a member of the American Legion, VFW and 27th ATG, Air Force Association. He and Phyllis participated in a number of Air Force reunions.

He enjoyed vegetable gardening and barbecuing all while still living in the same house he grew up in. As he had most of his life he enjoyed the company of dogs. He was an early environmentalist and promoted recycling and organic gardening. He once grew a small plot of cotton plants to see if he could get them to maturity before the first freeze. He also won a battle over cancer and used his leftover IV tubes for his gardening projects.

People who knew Floyd found an intelligent, knowledgeable citizen who enjoyed history and promoted civic participation. Floyd also had a wry sense of humor and was known to pull many practical jokes. He was a loving husband, father, grandfather, great-grandfather, brother, and friend.

He was preceded by his parents, Harry and Jennie Marian; wife, Phyllis; brothers, Roy and his wife Betty Jo, Melvin, Wayne (who was killed in WWII), and Earl and his wife Pam; half-brothers, Forrest, Glen and his wife Fern, and Dale and his wife Therese; half-sister, Mae; son-in-law, Quigg Fenn; and many other close friends and relatives.

The family would like to express their sincere appreciation to the wonderful caring staff at both the Kensington and AseraCare Hospice.

To order memorial trees or send flowers to the family in memory of Floyd Lamont Marian, please visit our flower store.