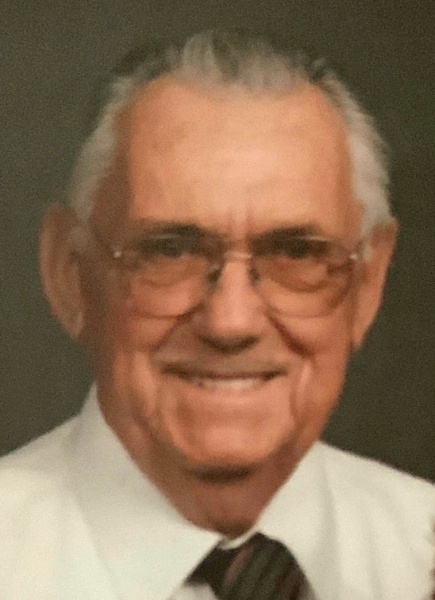 Joint Rosary will be 1:45 p.m. and Mass of Christian Burial will be 2 p.m. Friday, June 5, at St. Cecilia Catholic Church in Hastings with Father Christopher K. Kubat officiating. Burial with military rites by Harvard Veterans of Foreign Wars and Offutt AFB Honor Guard will be at Harvard Cemetery in Harvard, NE. Visitation for Francis will be 1-5 p.m. Thursday at the funeral home. There will be no viewing or visitation for Wanda. We will be in compliance with the CDC guidelines of 10 people gathering at a time for visitation, your cooperation is appreciated. Since there are material sharing restrictions, we ask that you bring your own pen for signing the registration book or memorial envelopes. If you do not bring one, we can do that for you. Memorials for Francis may be given to DAV or the Red Cross Blood Donor Program.

Francis was born on May 7, 1931, on the family farm in Riverton, NE to Michael John & Myrtle Ruth (Hogsett) Brophy. After the Republican Valley flood in 1935 that destroyed the family farm, they moved to Roseland, NE. He graduated in May 1950 from Roseland Public School.

Francis worked as a carpenter building the dam on the Harlan County Reservoir at Republican City, NE. He went into the United States Air Force in 1951. Francis was a radio tech at Scotts AFB in Illinois where he received his degree in radio/electronics in October 1952. He served 18 months in war zones in the Korean War as a radio and radar mechanic. Francis was awarded honorable discharge in 1955. He received the United Nations Service Medal, Korean Service Medal, National Defense Service Medal, and Good Conduct Medal.

When Francis returned from the service, he went to Hastings College in Hastings, NE from 1955 to 1959 to get his electrical engineer degree. While going to Hastings College he worked at Debus Bakery in Hastings, NE. Francis then worked at the Hastings Naval Ammunition Depot on high tech communications. He moved to Silverdale, WA where he was in civil service working on missiles and ships in Bangor, WA. Francis then moved to Fowler, CO and he worked in Pueblo, CO in the radar and x-rays for the space program of NASA. Once moving back to the Hastings area he went to work for Hastings Industries (Dravo) in Hastings as an electrical engineer drafting diagrams for cooling and heating. Francis then went to work for Cornhusker Ordnance Plant in Grand Island, NE building bombs and missiles. He retired in 1970 from civil service. Francis worked in electrical maintenance for Hastings Pork. While working for Hastings Pork he served in the Hastings Army Reserves Unit as a payroll clerk. Francis moved to Lincoln doing electrical maintenance work at the VA Hospital. After he retired in 1993, they moved to Harvard, NE.

While living in Harvard, Francis repaired anything electronic brought in by friends and family. They moved to Cambridge, NE in 2002 until 2020 where he helped at the WeeKids Preschool and Daycare playing with kids and making pancakes. He was a faithful Catholic and taught CCD classes. He was a Cub Scout leader, past member of the Eagles Club and Nebraskaland Treasure Hunters Club, and current member of NARFE, VFW, and American Legion. He enjoyed racing late-model stock cars, dancing, metal detecting, traveling to see family, and being a foster parent. Francis donated more than 40 gallons of blood beginning in 1950 and was also a pheresis donor until 2019.

Francis was honored and so humbled when he received a call in 2014 to accompany his fellow veterans on the Korean Veterans Honor flight to Washington D.C.

To order memorial trees or send flowers to the family in memory of Francis Brophy, please visit our flower store.