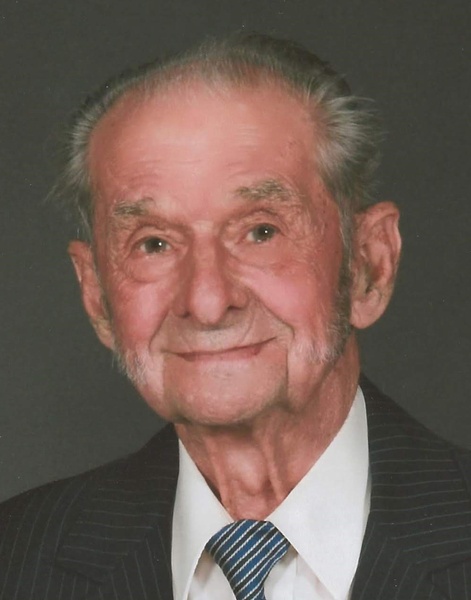 Rosary will be 7 p.m. on Friday, June 19 and Mass of Christian Burial will be 1:30 p.m. on Saturday, June 20 at Sacred Heart Catholic Church in Roseland, Nebraska with Father Nathan Hall officiating. Burial will be at Roseland Cemetery in Roseland, Nebraska. Visitation for Francis will be held from 12-4 p.m. on Thursday and 9 a.m.-3 p.m. on Friday at Livingston Butler Volland Funeral Home in Hastings, Nebraska. There will also be visitation from 5:30-7 p.m. on Friday and one hour prior to the service on Saturday at the church.

Francis was born on April 3, 1925 to Frank and Louisa (Hoxmeier) Mangers in rural Adams County near Assumption, Nebraska. He attended elementary school in Assumption, Nebraska and high school in Holstein, Nebraska. Following his education, his family moved to Roseland, Nebraska. He has been a Roseland resident since that time. Francis married Josephine Schumm at St. Stephen’s Catholic Church in Lawrence, Nebraska on October 12, 1953. Three children were born to this union: Patricia (Patty), Thomas (Tom), and Janet.

Francis worked at the Pickorial Paper Packaging Corp. Box Factory in Aurora, Illinois and then later for a sheep ranch in Gooding, Idaho. He returned to Roseland to work at the Navy Ammunition Depot (NAD) in Hastings. Then he went to work for Thomas Specialty. He spent his final 35 working years as a welder at Hastings Industries.

Memorials may be given to the family for a memorial to be established at a later date.

To order memorial trees or send flowers to the family in memory of Francis Mangers, please visit our flower store.