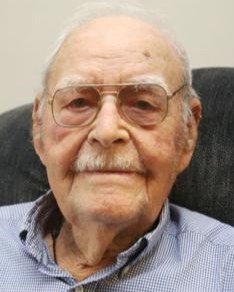 A Celebration of Life will be 10 a.m. Saturday, December 3, at First United Methodist Church in Hastings with Rev. Lance Clay officiating. Burial will be at Greenwood Cemetery in Trumbull. Visitation will be 4-7 p.m. Friday, December 2, at the funeral home, and one hour before the service at the church. In lieu of flowers, Frederick wanted memorials to be given to Habitat for Humanity and First United Methodist Church of Hastings, NE. The service will be live-streamed on Livingston Butler Volland Funeral Home’s website. To view the service, go to Frederick’s obituary and click the play button shown towards the bottom of the page.

Around the age of 21, he worked in Illinois picking corn by hand for two years, as well as operating a mechanical corn picker for one year.

He married Esther Marie Stimpert on May 24, 1942; she preceded him in death on July 15, 2009. In 1951 they bought a farm southeast of Trumbull, NE where he farmed full-time and performed machine work on the side. In 1995 he and Esther retired from farming and moved to Hastings, NE where he operated the Paulus Repair machine shop full-time.

During their marriage, he traveled to northern Chile, Mexico, and Haiti to perform mission work, and both he and Esther traveled to Mexico and Uruguay to serve on mission teams.

Frederick was an avid fan of Husker volleyball, and he enjoyed playing table shuffleboard at Good Samaritan Village. He had a great sense of humor and always liked a good laugh.

Frederick was preceded in death by his parents; wife, Esther M. Paulus; and one brother, Orville Paulus.

To order memorial trees or send flowers to the family in memory of Frederick J. Paulus, please visit our flower store.