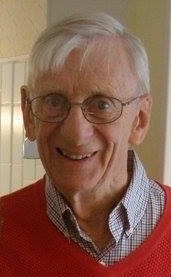 A private service was held. We know that in normal times, many of you would have come to say goodbye to Fred and help us honor his many contributions to the city of Hastings and the State of Nebraska. We hope each of you, in your way, will remember his life well lived and the influence he had on the quality of your lives. In better times we will all celebrate together. Donations, in honor of Fred, may be given to The Hastings Community Theatre, The Chorus of the Plains, The Hastings Symphony, and The Nebraska Cultural Endowment. Cards may be sent to: Beth Teller Horn, 6737 N. Calle Sin Nombre, Tucson, AZ 85718.

Fred was born on June 2, 1926, to Lee and Fred Teller, Sr., in Columbus, NE. Growing up he enjoyed school, Boy Scouts, sports, and most of all, singing, something he would do his entire life. He graduated from The University of Nebraska and moved to Omaha to begin his career as a movie theatre manager.

On March 13, 1949, Fred married his college sweetheart, Lorraine, at the Cornhusker Hotel in Lincoln. They moved to Hastings in 1952 and immediately started making friends and becoming involved in the community. Fred was active in Jaycees, Cub Scouts, Boy Scouts, and worked tirelessly on the boards of many communities, arts, and service organizations.

He and Lorraine served on the committee to rebuild Fisher Fountain and were on the founding board of Leadership Hastings. Fred was elected to the Adams County Board of Supervisors and later appointed to the Nebraska Arts Council. The Tellers gave their time to many and were honored for their efforts receiving the Ak-Sar-Ben Good Neighbor Award, the YMCA Arthritis Humanitarian Award, and the Leadership Hastings Alumni Award. In 1994 they were honored with the Hastings Chamber of Commerce Community Service Award and in 2006 were presented with the Thomas C. Woods III Partner in the Arts Award by the Nebraska Arts Council at the Governor’s Arts Awards.

Children loved Fred and he returned that love by reading to them at the Hastings Public Library and taking a seat on the board of the South Central Nebraska Children’s Chorale. As manager of the Strand, Rivoli, and Drive-In Theatres, he gave many young people of Hastings their first real job. It came with an advanced course in work ethic and how to make popcorn.

Fred’s second love was singing. He was a charter member of the Chorus of the Plains and anchored the bass section for more than fifty years. With friends from the chorus, he helped create a talented Barbershop Quartet called The Four Dads. Fred sang at weddings, celebrations, baseball games, and countless Hastings events. His singing talents naturally led to performances in musicals at the Hastings Community Theatre including a wonderful turn as Tevye in “Fiddler on the Roof”. Many lifelong friendships were formed with Fred performing in musicals and plays, often comedies showcasing his quick wit, while Lorraine worked her magic behind the scenes.

If singing was his second love, his first love was family. Fred and Lorraine were married for sixty-two years. They worked hard to be part of the fabric of Hastings. When asked about all their awards, Fred said receiving them was very nice, but the most rewarding part was knowing that he and Lorraine made a difference in the community.

The family would like to express their heartfelt gratitude to everyone at The Heritage at College View, Edgewood Healthcare, Good Samaritan Society Perkins Pavilion, Mary Lanning Healthcare, Mary Lanning Hospice, and especially to Kristi Anderson and Hiroko Warner for all the kindness, care, and love.

Fred was preceded in death by his parents; wife, Lorraine D. Teller; one brother; and one sister.

Fred will be loved and missed by his daughter Beth Teller Horn and grandson Jonah Horn of Tucson, AZ; his son and daughter-in-law Ric and Patricia Teller of Santa Clarita, CA, and a lifetime full of relatives and friends.

To order memorial trees or send flowers to the family in memory of Fredric "Fred" Teller Jr., please visit our flower store.