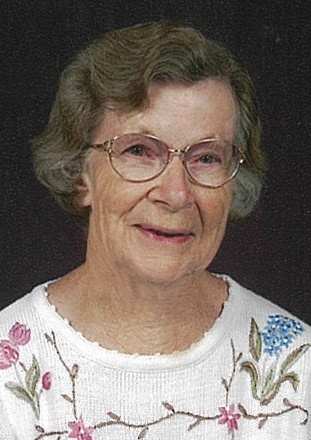 Services will be 10 a.m. Tuesday, September 21, at Butler Volland Chapel in Hastings with Pastor Johnny Walker and Pastor Kathy Uldrich officiating. Burial will be at Parkview Cemetery in Hastings. Visitation will be 1-7 p.m. Monday with family present from 5-7 p.m. and one hour prior to service at the funeral home. Memorials may be given to the family for a memorial to be established at a later date.

Verlene the daughter of Bertha (Stroh) DeHutt and Roy DeHutt was born in Harlan County, NE on August 19, 1926. Verlene’s father passed when she was a small child. Her mother remarried Ed Noren on November 3, 1941. Verlene graduated from high school in Alma, NE in 1943. While working in a café in Alma, NE she met Robert “Bob” Gipe and after a while, they were married on September 6, 1943, and began their married life together in Juniata, NE. They spent 57 happy years together and they were blessed with four children: Kay, Judy, and then twins were born, Mary and Larry.

Verlene worked as a Tupperware dealer, Mode O’Day, and at Gary Michael’s. After retiring, Verlene and Bob moved to Hastings, NE. They enjoyed camping, spending time with family, and traveling.

Verlene loved baking wedding and birthday cakes for family and friends. She also enjoyed her quilting and sewing groups, In her 80’s she delivered Meals on Wheels to “those old people” as she put it. She loved playing bingo and going to lunch with the “Ds”, two of her close friends. She attended Juniata Methodist Church until she moved to Trenton, NE where she became a member of West First Chapel in McCook, NE.

To order memorial trees or send flowers to the family in memory of F. Verlene Gipe, please visit our flower store.