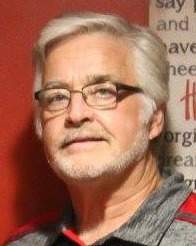 Services will be 10:30 a.m. Monday, September 12, at Harvard United Methodist Church in Harvard with Pastor Buck Linton-Hendrick officiating. There will be no burial at this time. Visitation will be 5-7 p.m. Sunday, September 11, at the funeral home. Memorials may be given to the family for a memorial to be established at a later date. The service will be live-streamed on Livingston Butler Volland Funeral Home’s website. To view the service, go to Jerry’s obituary and click the play button shown towards the bottom of the page.

Jerry was born on July 11, 1953, in Spalding, NE to Eleanor (Glaser) Ryan and Patrick Ryan. Jerry grew up on his parent’s farm in Greeley, NE. He attended Greeley Sacred Heart School and graduated from Greeley High School in 1971. Jerry attended Central Community College in Hastings for electronics and received his Bachelor of Professional Studies from Bellevue University. He was employed with Midlands Area Agency on Aging before becoming self-employed with Ryan Dental Systems. He was involved in Big Brothers Big Sisters for many years including the Board of Directors president in 1993.

His musician uncles in Nashville (The Glaser Brother’s) developed his passion for music. He has many fond memories of spending time with his relatives in Nashville.  In high school, he was in a band with his cousins called the “Second Generation.” He was involved in several other bands including his own called “Blue Clover.” His favorite music genres were Bluegrass and Celtic. He played many instruments including the banjo and guitar. Jerry became a luthier later in life and made and repaired many instruments.

Jerry had a passion for fishing. He was a charter member of the Queen City Bass Masters and fished at many lakes around the country. He would share his passion with anyone who would join him on the lake.

He married the love of his life, Sharon, on October 25, 2017. Together they enjoyed  Husker football, concerts, and traveling. Jerry enjoyed spending time with his children and grandchildren. He and Sharon could frequently be seen at their school events, sporting events, and recitals.

Jerry was preceded in death by his father, Patrick Ryan and granddaughter, Carah Mae Lang.

To order memorial trees or send flowers to the family in memory of Gerald Patrick "Jerry" Ryan, please visit our flower store.