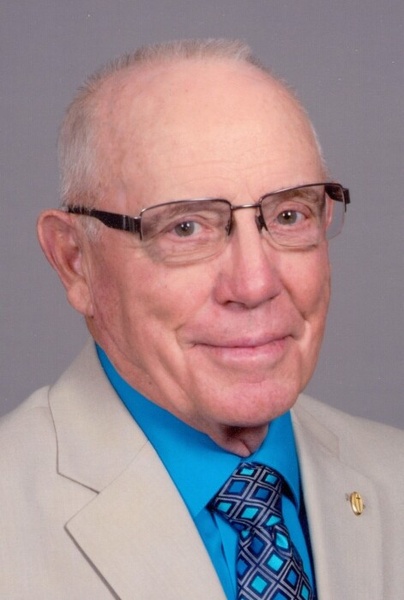 On September 18, 1941 God made a farmer. Glen Arnold Wiens was born to Arnold “Red” and Leola (Kohl) Wiens. His adolescent years were spent in all things 4-H and diligently living on the family farm. After graduating Hastings High school in 1959 he continued his education at the University of Nebraska in Lincoln on Ag Campus. As a student Glen was lucky enough to attend the greatest football game ever played, the infamous 1959 “No School Monday” Nebraska vs Oklahoma game. However the luckiest thing was several first semester classes required walking by Feddie Hall where he met the love of his life, Jeannette Ross. By spring they were engaged and married on his 19th birthday.

After receiving his Bachelor of Science in Agronomy & Mechanized Agriculture he worked for Farmland Industries and the Neligh Co-op.  Glen also served his country for 6 years as a Platoon Sergeant of the Army National Guard. In 1980, he moved back to continue the family farm after the death of his father. For many years Glen was the original Clark Griswald, with Christmas lights adorned on every building and implement available.  His holiday spirit could be seen from miles away.

Glen was passionate about farming and his community and was very involved in many organizations like Neligh, NE Jaycees, was a past president of the Adams County Corn Growers Association, Adams County Extension, Hastings Leadership, and many other community and civic organizations.  Glen was a very active member of Grace United Methodist Church where he served on numerous committees, weekly attendance, and 15 mission trips.

A football season ticket holder since 1964 Glen was a die hard Husker fan, a lover of life, his family and friends, spicy foods, and was one of the lucky few who never worked a day in his life. He will be sorely missed.

Glen was preceded in death by his parents.  He is survived by his wife, Jeannette Wiens of Ayr, NE; his daughter Jeanne (Steve) Anderson of Overland Park, KS; his sons David (Amber) Wiens of Hastings, NE and Dana (Andrea) Wiens of Lincoln, NE, and by his grandchildren Jake Cave of Kansas City, MO; Hayden Cave of Miami, FL; Madison Wiens, Parker Wiens, Charles Kohl Wiens, Augusta Wiens, Kyndra Wiens and Cale Wiens; his brothers Mel (Lois) Wiens of Kearney, NE; and Wayne Wiens of Grand Island, NE; and numerous loved nieces and nephews and other extended family too numerous to list.

Memorial Services will be at 11 a.m. Thursday, January 20, at Grace United Methodist Church in Hastings, with Reverend Stefanie Hayes and Reverend Jim Miller officiating.  If attending the services, masks are required.   Burial will be at Blue Valley Cemetery, Ayr, NE at 2:00 p.m.  There will be no visitation or viewing. In memory of Glen please donate to the Grace United Methodist Church Mission Fund and/or have lunch with extra jalapenos.

The service will be live-streamed on Livingston Butler Volland Funeral Home’s website. To view the service you will need to go to Glen’s obituary and click the play button shown towards the bottom of the page. Private condolences may be sent to the family at www.lbvfh.com. Livingston Butler Volland Funeral Home & Cremation Center is serving the family.

To order memorial trees or send flowers to the family in memory of Glen Wiens, please visit our flower store.