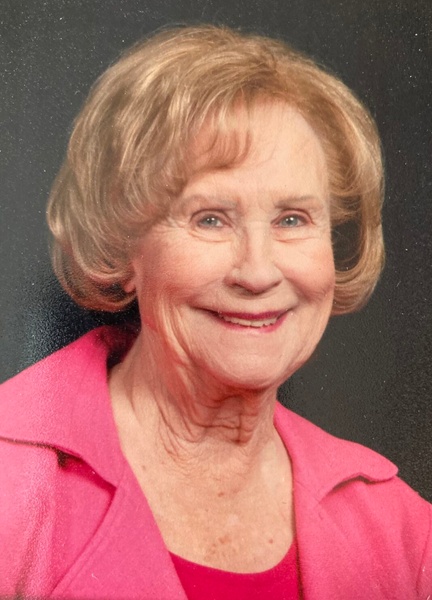 Glenda Rae Pauley (McManigal) gracefully rose into heaven on August 11, 2022, to join her beloved husband Bud and son Jerry. Glenda’s life meant so much to so many, but especially her beloved family. Funeral Services will take place on Wednesday, August 17 at 10 am at First United Methodist Church followed by a luncheon at Lochland Country Club. Guests are invited to wear turquoise in honor of Glenda’s favorite color. A private family burial will be held. Memorials can be given directly to Hastings College for the “Jerry Pauley Memorial Scholarship” or Start Over Rover in Hastings.

Glenda was born in Hastings, Nebraska to Cecil (Graves) and Dean McManigal on August 8, 1931. Glenda always spoke fondly of her childhood in Hastings. She graduated from Hastings High School and met William George Pauley Jr. (Bud) Pauley. Bud first saw Glenda at a Hastings auto dealership across the showroom floor and chuckled to his buddies, that’s the girl I am going to marry….they were joined in matrimony just mere months after meeting in 1950, honeymooned in Mexico, and then rented an apartment in Hastings for $50 given to them by Bud’s mother. Glenda loved to share how many times Bud found a new home for them… the last count was 27. Glenda and Bud traveled the world together throughout their lives. Each time Glenda went on a trip, she brought her mother back a pair of high heels, shoes were one of Glenda’s great loves in life! Eventually, she brought her grandchildren souvenirs from her adventures and loved sharing stories. Later in life, they traveled in their RV which fondly came to be called “Scarface”.  To Glenda, her marriage stood the test of time and lasted through her life, although she lost her beloved Bud in 1999.

Glenda and Bud’s union was blessed by five children and several beloved poodles, who were just like children to them. Glenda was the picturesque homemaker and socialite as she raised their children. Glenda played an active role in starting Pooh Corner Childcare center, the first of its kind in Hastings. As an entrepreneur’s wife, Glenda was always supportive of growth and philanthropy in Hastings. She supported Bud as he worked hard to start businesses in Hastings, the largest being Westland Homes. Glenda was inducted into the Pro Rege Society at Hastings College in 2004. Glenda was an active member of First United Methodist Church in Hastings for over 60 years. Glenda sat on the board of Sunnyside Home for years up until her health no longer enabled her to. Glenda was an active member of the DA Chapter of PEO and enjoyed socializing with ladies in several different groups. In her later years, her best friends called themselves “The Big Dogs” and enjoyed each other’s company immensely during their “attitude adjustment hours”.

The true highlight of Glenda’s life was being a mother, grandmother, and great-grandmother to both humans and dogs. Her children enriched her and Bud’s life with seven grandchildren, followed by 16 great-grandchildren. Her special “Grandma days” were so special filled with tours around Central Nebraska and no rules for her grandkids! Glenda loved to host holidays and make them special for her family, her two favorites were Halloween and Christmas. All of the kids knew her house is where you could find the extra-large candy bars. She loved dressing up in her witch costume to join in the fun. At Christmas time (and eventually year-round) a beautiful and giant Christmas tree donned her living room. She loved giving gifts, much more than receiving them, and as long as her health allowed, she never missed a loved one’s birthday.

To order memorial trees or send flowers to the family in memory of Glenda Rae Pauley, please visit our flower store.

Guests are invited to wear turquoise in honor of Glenda's favorite color.