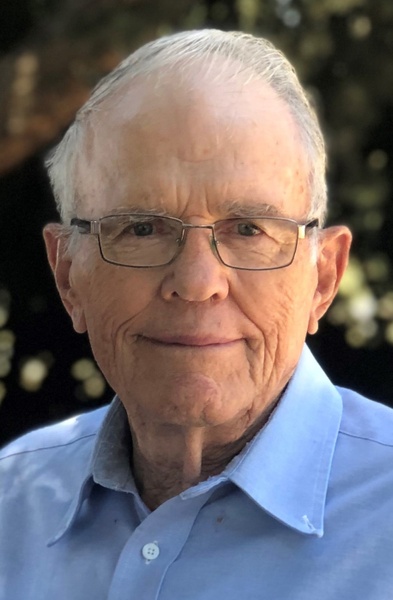 Services will be 10:30 a.m. Wednesday, January 19, at First Presbyterian Church in Hastings with Rev. Damen Heitmann officiating. Burial with military rites by the Army National Guard will be at 2 p.m. Wednesday at Hanover Presbyterian Churchyard Cemetery near Glenvil. Visitation will be one hour prior to service at the church. Memorials may be given to Central Community College for a scholarship for the electrical program. The service will be live-streamed on Livingston Butler Volland Funeral Home’s website. To view the service you will need to go to Glenn’s obituary and click the play button shown towards the bottom of the page.

Glenn was born March 29, 1926 in Glenvil, NE, he was the son of Harvey and Allie (Harrenstein) Hunnicutt and brother to his older sister, Harriet (Theesen). He was the descendant of a pioneer farm family that settled in the Glenvil, NE area. A graduate of Hastings High School in 1943, Glenn was drafted into the U.S. Army in 1944, where he served in Europe during WWII with the 69th Division. These memories and experiences were pivotal in his life and led to the gathering and compilation of a book he wrote based on his many letters home.

After military service, Glenn returned home and attended Hastings College graduating in 1950 and soon after, pursued a career as an electrician. In 1955 he launched his own business called Service Electric, which he continued into gradual retirement around the age of 85.

Glenn is survived by his wife of 71 years, Nadine (Killinger) Hunnicutt. Married in 1950, family life together became central in raising their nine children….Cheryl (Danskin), Gerald, Lonny, Randy, Melanie Butler (Greg), Julie Craig (Kenny), Scott (Evani), Lisa Hoffman (Todd), and Nancy Spady (Mike). He was a grandfather to 19 grandchildren and 24 great-grandchildren. A spectator to various events his children and grandchildren participated in, his presence was known to them supporting and affirming.

Glenn will be remembered for his work serving customers in Hastings and the surrounding area. His knowledge of the trade, his honest principles, and his meticulous work was trusted.

As a member of Hanover Presbyterian Church, his spiritual home of field and sky, Glenn served in various capacities of the church over many years.

Besides hiking trips with his family to the Colorado mountains, Glenn enjoyed being active playing baseball with his kids, watching football, skiing, and dancing with his wife.

Glenn also enjoyed traveling. He and Nadine took many trips over the years to Army reunions around the country and several to Europe. A biplane ride and several skydiving adventures were in his repertoire of memorable experiences.

He liked to kid and joke, ate ice cream like no other, always enjoyed a bowl of popcorn, and took great interest in his family history. He will be remembered by his many offspring as the one who told them as they left, “Don’t take any wooden nickels” and “Auf wiedersehen.”

To order memorial trees or send flowers to the family in memory of Glenn Hunnicutt, please visit our flower store.