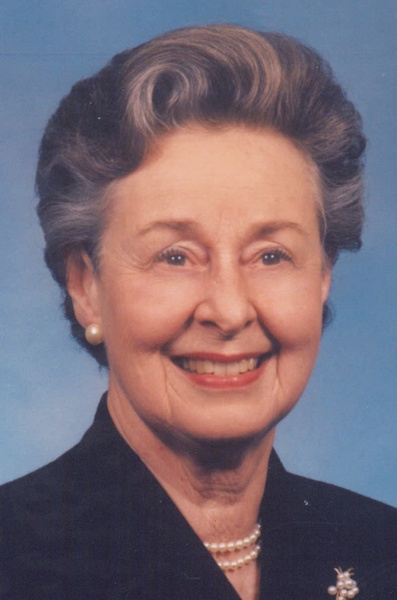 A Celebration of Life will be held on Friday, July 23, 2021, at 11 a.m. at First Presbyterian Church, Hastings, NE with Rev. Greg Allen-Pickett officiating. A private family committal will be held at Parkview Cemetery in Hastings. The service will be live-streamed on Facebook at https://www.facebook.com/fpchastings beginning five minutes before the service. Visitation will be on Thursday, July 22, 2021, at Livingston Butler Volland Funeral Home from 9 a.m. - 7 p.m., with family present from 5-6 p.m. Memorials can be sent to the Hastings Community Foundation, P.O. Box 703, Hastings, NE 68901.

Gretchen (Hollman) Lainson was born in Minden, NE on January 25, 1916, to William H. Hollman, Jr. and Grace (Adams) Hollman. Both sets of grandparents came as young people to Minden in the 1880s, and both of her parents were born in Minden.

She married Hal Lainson of Hastings in January of 1938, and her adult education continued in the active civic and social organizations of Hastings. The young couple purchased a small Victorian house on University Boulevard in 1939, and through the seventy-two years of their married life, continued to gradually enlarge and improve the property.

In the first years of marriage, she served as organist for the First Presbyterian Church, under Hayes M. Fuhr’s choral direction, an association she cherished. Later in the 1950s, she worked closely with Dr. Fuhr as secretary to the committee to select the new, specially designed Austin Pipe Organ for the First Presbyterian Church. Through the years, she was active in the Women’s Association, Sunday School, the choir, and in other committees of the Church.

Hal Lainson’s responsibilities for twenty-seven years (1950-1977), as Chairman of the Board of Trustees of Hastings College, kept them both happily involved in the expansion and development of the College, and their home often served for special occasions in those early years.

Appointed to the Hastings Public Library Board in 1956, (which at that time was combined with the Hastings Museum Board), she served nineteen years, during which time the beloved old Carnegie Library Building, with its 13 front steps, had to be replaced. As President of the Board, she helped lead the Community effort through the successful bond campaign and the design and the 1963 dedication of the present Library building. It was an exhilarating time with wonderful, dedicated people. In 2012, she served as co-chairman of the Library Renovation and was very pleased with the new changes and wonderful technologies the Library was able to offer.

Appointed to the Board of the Nebraska State Library Commission, she served a three-year term and was President in 1969-1970. She received the Nebraska Outstanding Library Trustee award in 1972.

She was a member and Secretary of the first Community Chest Board in the 1940s (now the United Way).

Following the devastating Dutch Elm disease in the 1970s, she was appointed Co-chairman with Mr. Russell Davidson and the City Forester to the Arbor Day Centennial Committee to arrange for hundreds of trees to be planted by Hastings residents in 1972-1973. She had a deep passion for trees all through her life.

A long-time member of the YWCA, she served on its Board and many committees, as well as, on the YWCA National World Service Council.  In 1996 she received the YWCA new Distinguished Service Award, which recognizes the great contributions of the YWCA’s early founders and many strong women through the generations since. This recognition carries the name of Gretchen Hollman Lainson but is not awarded every year.

In 1984 she was appointed by Governor Kerry to a publicly funded state-wide Committee of sixty-six members to study the needs of Higher Education. It was an exceptional committee and all the recommendations were approved by the State Legislature, but only partially funded.

In the late 1980s she was appointed Co-chairman of a Committee of Hastings Building Contractors for the basic repairs to the City Auditorium. These repairs and improvements were much enhanced in the 1990s by a dedicated committee led by the late Robert L. Foote.

She served many years on the Symphony Board and helped found the original Symphony Guild. In 1993 the Lainsons were named to the Hastings Symphony Orchestra’s Hall of Fame.

She and Hal received the “Thomas Woods III Nebraska’s Partner in the Arts” Award in 2002.

She was a member of the Dutton-Lainson Company Board of Directors for over 50 years.

She was preceded in death by her husband, Hal Lainson, in 2010, and her parents; one brother, Edgar Adams Hollman, and sister-in-law, Evelyn Hollman; one niece, Suzanne Hollman of Oregon; and brother-in-law and sister-in-law, John and Phyllis Lainson.

To order memorial trees or send flowers to the family in memory of Gretchen Lainson, please visit our flower store.