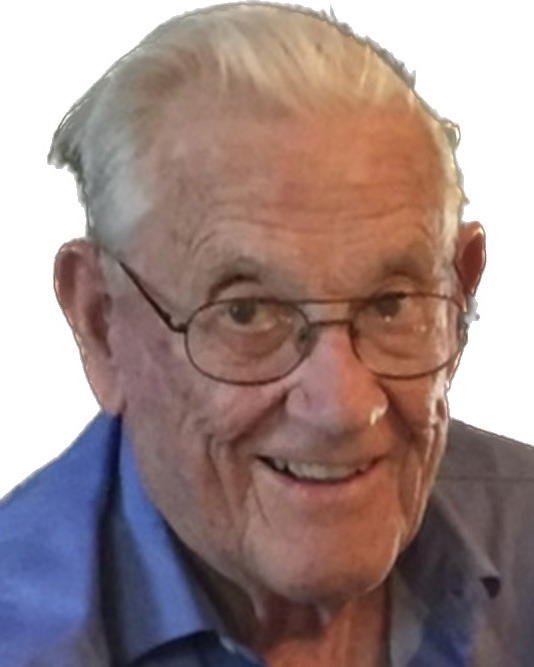 Graveside Service will be 10 a.m. Tuesday, October 25, at Parkview Cemetery. Services will follow at 11 a.m. at First Congregational United Church of Christ in Hastings with Rev. Barry Rempp officiating. Visitation will be one hour before the graveside service at the funeral home. Memorials may be given to the Hastings Military Honor Guard or First Congregational United Church of Christ.

Harold Dwyer, former long-time resident of Hastings, Nebraska, resided in Geneva, Nebraska, at the time of his passing on October 20, 2022.

He lived a fulfilling and inspiring life serving his family, friends, church, community and country.

Harold Eugene Dwyer was born near Council Grove, Kansas, on September 23, 1924, to Harold Winfield Dwyer and Ellen (Cristman) Dwyer. Harold had an older sister and brother, Aileen (Groen) and Stanley. As the family moved around Kansas, Harold attended schools in Tipton, Glasco and Manhattan.

In Manhattan, Harold’s lifelong enthusiasm for flying and building things developed. Harold’s hobby was building model airplanes, and when he flew the rubber band propelled planes, older brother Stanley retrieved the models for another flight.  Harold and his young buddies also built a bobsled.  And when they weren’t sledding on the hills in Manhattan, the boys rented the bobsled to the K-State college students—as long as the young boys could ride along.

In 1940 Harold moved with his folks to Hastings, Nebraska, where he attended Hastings High School and played first base on the baseball team. Harold, “Loop,” graduated in the class of 1942. Soon after his eighteenth birthday, Harold answered the call to duty and enlisted in the Army Air Corps; he wanted to fly. Before reporting for duty, Harold studied math at Hastings College, took private flying lessons and soloed in an Aeronca Chief. Harold earned his wings in the United States Army Air Forces in August 1944 and served in World War II as a B-17 combat pilot with the 8th Air Force, 34th Bomb Group, 391st Squadron stationed near Mendlesham, England. Near the end of the war, after nine combat missions, Harold and his crew flew five Chowhound missions. Considered humanitarian operations, crews dropped food rations from the bomb bay of their bombers to the starving Dutch people from an altitude of less than 300 feet. Back in Hastings Harold served as commander of the Civil Air Patrol and joined the Reserves. Upon his honorable discharge in 1963, he’d attained the rank of Major. What he learned in the service—discipline and flying—shaped his life.

Harold met his future bride Darlene Coplen at the bowling alley in Hastings when the “girls,” pretending not to know how to keep score, asked the “boys” for help. On one date Harold strapped Darlene into an open cockpit PT-19, parachute included, and she held on for quite a ride. They eloped on April 29, 1948 and traveled to Minnesota to buy lumber for the boat Harold was building. The couple was blessed with 74 years of marriage and four daughters: Jan, Kay, Sue and Lori.

During his lifetime, Harold built many, many houses, including their Hastings home and second home in Grand Lake, Colorado. He remarked, “To make a living, it was going to be with my hands and back and some brain power. My job with the W. G. Pauley organization was to start up and oversee two factories to build houses,” and responsibilities included supervisor, vice president and company pilot. Harold said he “liked to fly about as well as he liked building houses.” His last entry in his flight log was in August 1989.  He’d accumulated over 5,000 hours of flying time in many types of airplanes, including an association in the 1950s with the Biegert Brothers of Shickley, Nebraska, flying the B-17 they’d modified for spraying.

Harold, observant and an avid reader and lifelong learner, served on the building committee for his church—the First Congregational United Church of Christ, chaired the Hastings Airport Authority board, and was a member of the VFW, American Legion, Elks, Air Force Association, 34th and 463rd Bomb Group Associations, and the 8th Air Force Historical Society. Harold, a good neighbor, readily helped others with their projects and in any way he could. And he “retired” around 1985 with a growing list of his own projects. In Harold’s words, “One of the more interesting projects was my involvement with my family’s efforts in trying to find my brother Stanley, who was also a B-17 pilot and was shot down over Austria in 1944 and has been MIA ever since.” This fulfilling journey is documented in the book Searching for Stanley with contributions by Harold. In 1999, 75-year-old Harold and Darlene, side-by-side and supported by friends and family, rebuilt their Hastings home after an extensive fire or as Harold called it, “a big marshmallow roast,” scorched or destroyed much of the structure. Harold commented, “Building the house was fun the first time, work the second.” With his good attitude and sense of humor, he made the best of situations.

Harold, a “girl dad,” taught his daughters how to use a hammer and paintbrush, pitch a tent, mow the yard, wax boats, drive the motor home pulling a boat, and by example, instilled his “can do” attitude and philosophy of “work hard, play hard.” Sometimes play entailed work, and Harold made sure we left a campground cleaner than we found it. Harold and Darlene, along with generations of family and countless friends, including their Dizzy Dozen couples gang, have endless memories—and some amusing stories—of camping, boating, fishing, hunting, water and snow skiing, golfing, going on picnics, attending Husker football games and 34th Bomb Group reunions, exploring the United States and countries abroad, and enjoying various activities in Grand Lake, Colorado—particularly hours of playing cards after painting or chopping wood or scooping snow.

For Harold, surrounded by a household of females, the boy-girl ratio evened out with the sons-in-law. Harold treated each son-in-law like a son, greeted them with a firm handshake and maybe a “Hi, Bub,” and liked helping the boys with their building projects while passing on some valuable lessons about carpentry: organize your day, the right tools will make a job easier, don’t point out your mistakes since you’re the only one who notices them, mistakes can be fixed, and laugh after you spend five minutes looking for the hammer you’re holding in your left hand. Papa D loved and embraced each grandchild and great-grandchild and enriched their lives. The respect was mutual. Always active and youthful, 86-year-old Harold and one of his granddaughters jumped out of a “plane flying perfectly” to experience the thrill of skydiving.

Harold derived satisfaction “from his family, being a good citizen and having the opportunity to work hard and prosper in the ‘the Good Life.’”

Through life’s ups and downs, he adapted, and often his perseverance and actions spoke louder than his words. His sense of right and wrong was fundamental. Like the campgrounds, he left the world a better place.  Harold is remembered for his priorities, his humility, his common sense and patriotism. We will miss his love, his kind spirit, the twinkle in his eyes, some classic comments—“how ‘bout that” or “time marches on”—and the opportunity to ask him, “What do you think?”

To order memorial trees or send flowers to the family in memory of Harold E. Dwyer, please visit our flower store.