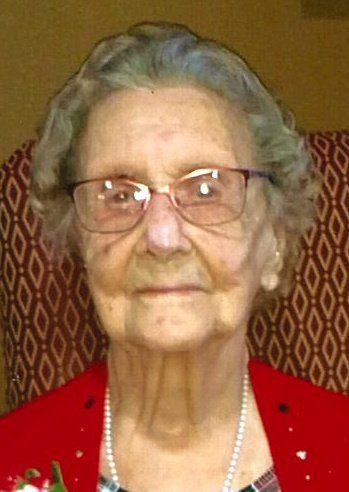 Graveside Services will be 11 a.m. Monday, November 2, at Guide Rock Cemetery in Guide Rock with Pastor Greg Lindenberger officiating. Visitation will be 1-5 p.m. Sunday at the funeral home. Memorials may be given to NETV for Husker broadcast or First United Methodist Church of Hastings. For the health and safety of others face masks are required for those attending the visitation and funeral, your cooperation is appreciated. Since there are material sharing restrictions, we ask that you bring your own pen for signing the registration book or memorial envelopes. If you do not bring one, we can do that for you. Private condolences may be sent to the family at www.lbvfh.com. Livingston Butler Volland Funeral Home & Cremation Center is serving the family.

Helen was born on a farm in Webster County near Eckley on October 29, 1912, to Jake and Albie (Sidlo) Portenier. She graduated from Eckley School where she met Glenn Bosley. They were married in l932 and as his career was as a Superintendent of Schools in many Nebraska towns, she was the “wife of the superintendent.” They raised two sons, Leslie and Howard. They were married 74 years at the time of Glenn’s death.

Helen was involved in many sports from the time she was a little girl playing ball with her brothers, Ralph, Earl, and Keith. She attended all the high school sports events in many schools and bowled, golfed, and played softball and catch with her grandchildren. She organized golf groups in two towns.

She was an avid reader from the time she entered school, through the years, and up until she was 104. She started two libraries where they lived. Also, she learned to quilt at an early age and stopped quilting at 102.

She enjoyed the bridge clubs in many towns. She always found a group of women to work on leisure projects. She and her husband were active in churches wherever they lived, using her bookkeeping knowledge teaching Sunday School and active in women’s groups. She always found a friend to giggle and have fun with.

She took college classes and extension classes so that she could work as a librarian and bookkeeper at McClelland’s in Hastings. She learned to run the scales at Hagemeister Elevator in Hemingford. After retirement, she purchased and learned to use a computer. Also, after retirement, she learned to officiate at volleyball games with her niece, Connie Maas. She played basketball in her freshman year which was the last year Nebraska allowed girls’ basketball in high school, as it was considered too strenuous.

She stopped having birthdays at 39 and took it up again at 80. She and Glenn purchased a small camper and pulled it many places in the Midwest and Canada.

Helen was the keeper and recorder of her family history organizing Portenier family picnics for many years as well as attending the Eckley school reunions. She and her husband traveled to Switzerland in 1994 and visited her ancestor’s homes, churches, and schools.

She and Glenn moved to Hastings and purchased the only house they ever owned in l973. In 2015 she moved to Heritage at College View. She had a ready giggle and she looked forward daily to phone calls and Zoom with her family.

Helen was preceded in death by her parents; husband, Glenn Bosley; son and daughter-in-law, Leslie & Norma Bosley; and siblings and spouses.

To order memorial trees or send flowers to the family in memory of Helen Bosley, please visit our flower store.