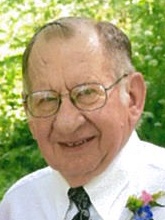 Services are 10:30 a.m. Monday, January 6, at Butler Volland Chapel in Hastings with Rev. Darren Theesen officiating. The family asks those attending the service to please wear casual attire. Burial with military rites by Nebraska Military Funeral Honors Team will be at St. Paul’s Lutheran Churchyard Cemetery, west of Glenvil. Visitation is 2-4 p.m. Sunday with family present and one hour prior to service at the funeral home. In lieu of flowers, memorials may be given to the family.

Herbert was born August 20, 1937, in Hastings, NE to Dick O. & Lena (Kreienheder) Theesen. He graduated from Hastings High School in 1955. Herbert served in the Army Reserves. He married Beverly A. Stilson on July 2, 1961, in Hastings, NE.

Herbert was a mechanic for 60 years and owned Herb’s Garage from 1962 to 2015. He was a member of Eagles Aerie #592. Herbert enjoyed his work as a mechanic, farming, fishing, stock car racing, and spending time with his dog “Maggie”.

Herbert was preceded in death by his parents.

To order memorial trees or send flowers to the family in memory of Herbert Theesen, please visit our flower store.