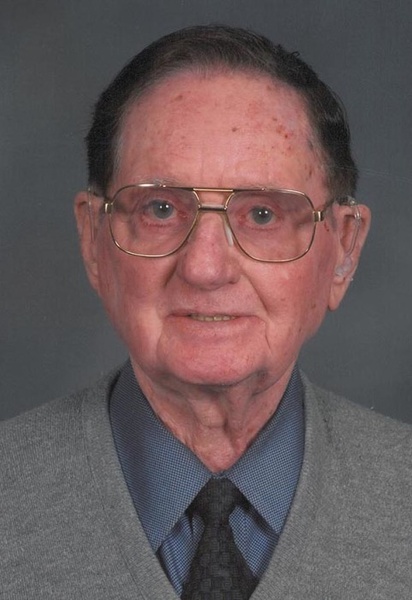 Rosary is 6 p.m. Sunday, June 2, at Butler Volland Chapel. Mass of Christian Burial is 10:00 a.m. Monday, June 3, at St. Cecilia Catholic Church in Hastings with Father Joseph M. Walsh and Father Thomas Brouillette officiating. Burial with military rites by Hastings Military Honor Guard will be at Parkview Cemetery in Hastings. Visitation will be 2-6 p.m. Sunday at the funeral home, and one hour prior to service at the church. Memorials may be given to Hastings Catholic Schools Trust.

Jack was born November 23, 1923, in Hastings, NE to Thomas P. and Anna M. (Hoarty) Deveny. He attended elementary school at District 14 in Adams County and graduated in 1937. Jack graduated from Grafton High School in 1941 and was awarded a scholarship to Hastings Business College. He attended Hastings Business College for one year before going into the army as part of the World War II effort.

He was inducted into the United States Army on February 24, 1943. He was stationed in Europe and was a member of the 555 th Anti-Aircraft Battalion. While in Europe he spent 134 days on the front lines at the Battle of the Bulge.

On May 29, 1948, Jack and Ruth were married at St. Cecilia Catholic Church. They were married for 58 years until Ruth passed in 2006. Jack and Ruth had five children; three sons; Pat, Jim (wife Patti) and Phil (wife Renee); two daughters; Mary and Katie, and two grandchildren, Shelby and Mike (wife Dalyce).

After college Jack started his business career. Between 1951 and 1970 he bought and sold several businesses. In 1971 Jack and his son Jim opened Jim Deveny Motors. They operated together until 2010 when Jack retired.

Jack enjoyed most sports, but baseball was his favorite and the World Series was the highlight of his year. He acquired a special interest in horses from his father and often attended the horse races.

Jack was very social. He loved to meet with the guys for coffee to discuss what was happening in town, sports or anything else. He had a soft spot for the underdog or people who were down on their luck. He often provided a helping hand to someone who needed it.

Starting in the late 1970’s Jack wintered in Arizona and continued to do so until traveling became too difficult. He liked Arizona because the winters were mild.

To order memorial trees or send flowers to the family in memory of Jack Deveny, please visit our flower store.