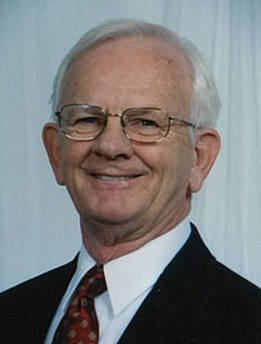 Graveside Services with military rites by Hastings Military Honor Guard will be 2 p.m. Friday, September 11, at Sunset Memorial Gardens Cemetery in Hastings with Pastor Rev. Greg Allen-Pickett officiating. A memorial service will be held in the spring at First Presbyterian Church in Hastings, NE. Visitation will be 1-8 p.m. Thursday at the funeral home. Memorials may be given to First Presbyterian Church of Hastings, American Heart Association, or Hastings Area Habitat For Humanity. For the health and safety of others face masks are required for those attending the visitation and funeral, your cooperation is appreciated. Since there are material sharing restrictions, we ask that you bring your own pen for signing the registration book or memorial envelopes. If you do not bring one, we can do that for you.

James was born in Brooklyn, NY, on December 28, 1931, and at an early age was placed in the care of the Edwin Gould Foundation for Children; under that auspices, he was remanded to the care of a series of foster parents in New York State. He graduated from the W.C. Mepham Central High School in Bellmore, NY in 1949. After graduation, he served three years as a radio intercept operator with the U.S. Army in Germany. Upon discharge, he was employed briefly by the Decca Record Co. in New York City.

He enrolled in Park College, MO in 1953 and received a bachelor’s degree three years later. He attended Harvard Divinity School 1956-1959, receiving the degree of Bachelor of Theological Science. In 1977, he was awarded the degree of Doctor of Ministry by the University of Dubuque Theological Seminary.

Rev. Cooke served as a Chaplain in the U.S. Army and the Army Reserve, retiring in 1991 in the rank of Lieutenant Colonel. His assignments included Germany, Fort Leonard Wood, Fort Carson, and Vietnam. He received a Bronze Star Medal with oak left cluster, a Purple Heart Medal, a Meritorious Service Medal with oak left cluster, an Army Commendation Medal, a Good Conduct Medal, an Army Reserve Achievement Medal, a Vietnamese Gold Honor Medal, and Gallantry Cross with Palm. In addition, he received several service and campaign medals, unit citations, and qualification badges. In 1997, the Lincoln Chapter #15 of the Reserve Officers’ Association presented him with their annual Minuteman Award.

He was well known in Lincoln, serving as President of the Lincoln-Lancaster County Health Board, University Place Community Organization, Lincoln Urban Ministries, Lincoln Fellowship of Churches and its successor the Lincoln Interfaith Council. For many years he helped build houses with Habitat For Humanity, serving as President of the affiliates in Lincoln and Hastings.

Rev. Cooke loved God, his family, and his country. He followed God’s call as a Presbyterian minister and as an Army Chaplain, serving God’s children in many places and circumstances. He had a beautiful baritone speaking and singing voice which he shared while singing and preaching in the church and while spinning tales for family and friends. He took great joy in books, music, building things with his hands, and traveling to other places. Ireland held a special place in his heart. He never met a stranger. He struck up conversations in train stations, gas stations, grocery stores, restaurants-even when he didn’t speak the other person’s language.

He was a kind and generous man, with a great sense of humor and a rare depth of compassion for others. He also had a deep love of knowledge which he passed on to all his children and grandchildren. He was a loving father and grandfather, and a faithful husband and friend for 65 years. He will be missed.

He married Mary Jeanne Hay while a student at Park College, on May 31, 1955. They had five children; Paula Schaffner, James Cooke Jr., David Cooke, Rachel Florek, and Ruth Nielsen.

To order memorial trees or send flowers to the family in memory of James Cooke, please visit our flower store.