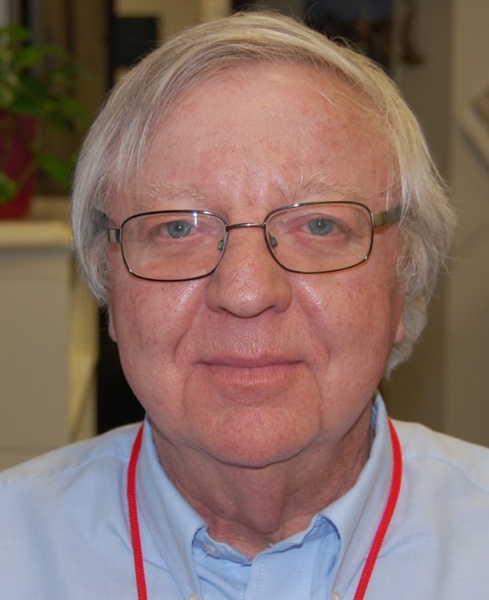 James Edward “Jim” Wray, Jr. of Hastings, NE, passed away on Friday, April 29, 2022, at Mary Lanning Healthcare in Hastings at the age of 74.  Cause of death was kidney disease and Lewy Body dementia.

Memorial Services will be 1:30 p.m. Wednesday, May 4, at Butler Volland Chapel in Hastings with Rev. Greg Allen-Pickett officiating. There will be no burial at this time. Visitation will be 1-7 p.m. with family present 5-7 p.m. Tuesday, May 3, and one hour before the service at the funeral home. Memorials may be given to the family for a memorial to be established at a later date. The service will be live-streamed on Livingston Butler Volland Funeral Home’s website. To view the service, go to James’s obituary and click the play button shown towards the bottom of the page.

Jim was born December 29, 1947, in Springfield, MO, to James E. (Jimmy) Wray and Dorothy Gallagher Wray. His dad was an electrician by trade, a skilled woodworker, and was a WWII veteran of the engineering corps in Burma and India. His mom was a full-time mother and housewife and later a school system clerk. He had a younger sister, Janet. His Ray/Wray-Haskett-Jones-Payne-Gallagher-Conry-Spellman-Barnett ancestors were Scots-Irish and English who migrated to Missouri from Ohio, Kentucky, and East Tennessee.

Jim grew up in a Springfield neighborhood of small homes and many children where baseball was a favorite activity. He was an ardent Cardinals fan all his life. He often went fishing with his dad who also taught him carpentry, precision, and patience. He enjoyed tramping through the woods with his beloved beagles and once brought home three orphaned baby raccoons that were raised to maturity. He enjoyed canoeing, water skiing, and camping with family and friends. His mother taught him neatness and appreciation of good cooking. Jim was a wonderful big brother to Jan, helping her with school work and teaching her to ride her bike, play marbles, board and card games, tennis, chess, and climb trees. They shared wonderful times together as children and fought only when water guns or snowballs were involved.

Jim excelled in scholastics, baseball, tennis, track, and speech/debate at Hillcrest High School, graduating in 1966. He earned a B.S. in mathematics and physics from Tulane University in 1970. In 1974, he earned a Master’s in Mathematics from Southwest Missouri University. He began work on a Ph.D. at the University of Missouri at Columbia, 1975-1977, and continued at the University of Idaho in Moscow, 1977-1980, with a graduate instructor position teaching calculus. He ultimately took a full-time job on campus as a scientific programmer with the College of Agriculture in 1981-83, and later as Supervisor/Computer Analyst, 1983-84.

At MU, he met Cheryl C. Menninger who worked in the Mathematical Sciences Library, and they married in August 1977 in the college chapel, setting off with two cats the following day for Idaho. While living in Moscow, they enjoyed the Pacific Northwest and had two children, Sarah and Christopher. They saw the Tutankhamen exhibit in Seattle on its first American tour, visited Glacier National Park and tourist sites in western Canada, dug for garnets in Idaho, and experienced the ashfall from Mount Saint Helens’ eruption. In 1984, the family moved to Hastings and Jim began working for the U.S. Meat Animal Research Center (USMARC), near Clay Center. In 1990, they welcomed another daughter, Hannah. The family also had three more cats (not all at the same time).

Jim was employed for 30 years at USMARC until retirement in 2014 as the Computer Services Manager initially, then Supervisory Information Technology Specialist. As a principal database architect, he developed databases and information systems and was an expert in database modeling and design. He served as a mathematical and statistical consultant for the researchers at USMARC, providing statistical analysis for their published works. He was involved in bioinformatics and was co-lead developer of the genomics database (genetic maps of cattle, sheep, and swine) and the information management system used at USMARC, of which he was extremely proud. He was invited to give three presentations at professional conferences and received several Certificates of Merit and of Appreciation from the USDA.

Wrote one fellow USMARC employee, Jim “was methodical and therefore arrived at the best solution more often than not. Jim was always willing to listen and would try to assist with the problem. He was approachable, helpful, a teacher, and a trusted colleague.”

He enjoyed sharing knowledge as a teacher. He worked as a day camp counselor during his summers off from high school and college, mentoring children in outdoor skills and activities. In the 1970-71 school year, he taught geometry and senior math at Terrebonne High School in Houma, LA. In college, he was usually employed as a Graduate Assistant or Instructor for calculus classes. At USMARC, he helped fellow employees learn technical material, mathematics, statistics, and the necessity to proofread one’s work. At home, he was an over-qualified tutor for math homework.

Outside of work, Jim enjoyed vegetable gardening, folk and country music, attending Nebraska football games, and watching sports on TV. He was interested in recycling and volunteered at the Hastings Recycling Center, serving on the Board of Directors and later as its Chairman for several years. He was also a youth soccer coach with the YMCA from 1997-2000 and a Board member with the Hastings Soccer Club, 2002-2008. He followed Hannah’s soccer successes with unending interest.

Jim was kind, unselfish, generous with his time, and tolerant of others. He was loyal to his family, conscientious, and patient. He was an environmentalist and was a good person at heart. He was totally devoted to his family and will be greatly missed forever.

To order memorial trees or send flowers to the family in memory of James Wray Jr., please visit our flower store.