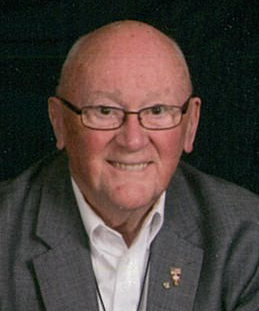 He was a resident of Hastings, NE and a former resident of Arvada, CO. A lively and engaging Irishman, Jim was born on November 1, 1932, in Iowa City, IA the third of seven children born to Richard James Connor Sr and Pauline (Teefey) Connor. The family moved to Columbia, MO in 1942 and later moved to Denver, CO in 1949.

Jim attended Cathedral High School in Denver and graduated in 1951. Continuing his education in Denver, he studied at St. Thomas Seminary and Regis College.

Mr. Connor was active his entire life in community service and chose professions that supported that passion. He spent many years at executive levels in chambers of commerce in Colorado and Nebraska, as well as in the U. S. Chamber of Commerce and participated in many groups and organizations that served to benefit others. Jim achieved the designation of 4 th Degree Assembly 608 and 3 rd Degree Council 1123 in the Knights of Columbus in Hastings, NE.

Jim was an avid storyteller and reader and put those interests to use as the owner/publisher of the Arvada Community News in Arvada, CO and later served as president at both the Effective Governance Consultants and the National Library Association - assisting small and rural libraries in the western US.

Jim was a very generous and giving man. He enjoyed people from all walks of life, engaged in conversation with anyone he encountered, and often was a leader of the many groups and organizations he participated in with the most recent being the Resident Advisory Council of the Good Samaritan Society. He had a wide variety of interests and was always up to date on current events. He loved spending time with his family, enjoyed nothing better than a good book, and was an avid Denver Bronco and Nebraska Cornhusker football fan.

James D. Connor and F. JoAnn Jones were married in 1954 and to that union four children were born: Richard W. Connor, Laurel E. Connor, Carin J. Connor, and Christopher J. Connor. They were later divorced and in 1981 he met the love of his life, Sharon K. Connor. They wed in August of 1982 and he referred to her as “my bride” for the next 35 years, until her death in October of 2017.

He was fiercely loved and is sorely missed!

To order memorial trees or send flowers to the family in memory of James "Jim" Connor, please visit our flower store.