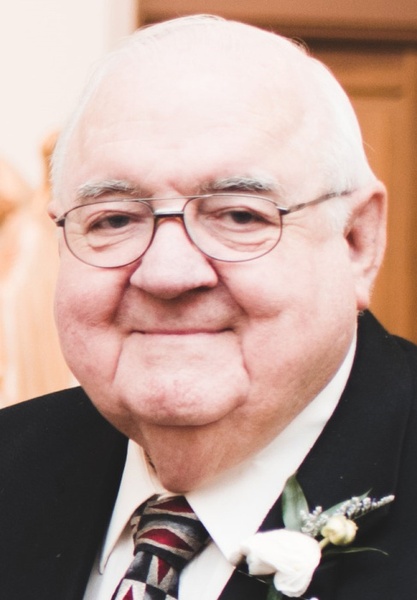 Funeral services will be 10:00 a.m. Tuesday, May 4, at Immanuel Lutheran Church in Glenvil with Pastor Patti Byrne officiating. Burial will be at Glenvil Cemetery in Glenvil following the service. Visitation will be 5-7 p.m. Monday, May 3, at Livingston Butler Volland Funeral Home. Memorials may be given to Immanuel Lutheran Church. The service will be live-streamed on Livingston Butler Volland Funeral Home’s Facebook page. The direct link for that page is www.facebook.com/lbvfh , the link will not be live until five minutes before service time.

Jim was born August 13, 1939, in Hastings, NE to Jesse & Evelyn (Saathoff) Engel. Due to his father’s passing, Evelyn remarried to Elden Fitzke. Jim attended Fairfield High school and graduated in 1957. After high school he attended Lincoln School of Commerce graduating with his Associates in Business. Jim married Shari Knox on August 22, 1957 in San Jose, CA.

He worked for Fairfield State Bank and began as a teller, but quickly worked his way up and eventually became president. Jim parted ways with the bank in 1978 and began his own insurance agency and tax preparation business, about the same time he and his brother started a farming operation as well.

James was preceded in death by his parents; step-father and brother, Steve Engel.

To order memorial trees or send flowers to the family in memory of James "Jim" Engel, please visit our flower store.