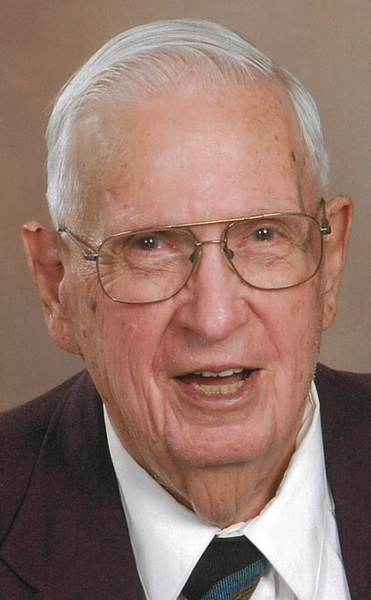 Services will be 10:30 a.m. Tuesday, April 27, at First St. Paul’s Lutheran Church in Hastings with Pastor Joel Remmers officiating. Burial with military rites by Hastings Military Honor Guard will be at Parkview Cemetery in Hastings. Visitation will be 5-7 p.m. Monday at the funeral home. Memorials may be given to First St. Paul's Lutheran Church or Mary Lanning Home Care. For the health and safety of others face masks are required for those attending the visitation and funeral, your cooperation is appreciated.

Jim “Gus” was born September 26, 1929, in Casper, WY to Axel & Helen (Springer) Gustafson. They moved to Gothenburg, NE during his grade school years. He was proud to be on the 1945 state championship high school football team. Jim graduated from Gothenburg High School in 1948.

In October of 1948, Jim joined the Air Force and served during the Korean War as an airplane mechanic. He was an instructor for airplane mechanics at Sheppard Air Force Base in Texas during his last year of service. He joined a traveling men’s singing group called “The Barbershoppers” during that last year also.

Jim moved to Omaha, NE in 1952 where he worked at Safeway as a meat cutter. Following this, he moved to Chicago in 1954 with his best friend, Tom Loutzenheiser, to work at Alton Box Board.

His final move was to Hastings, NE in 1956 to work at Great Plains Packaging. He was there when the company began. He initially worked as a dye maker then ran the corrugated department for 20 years. Following this, he worked in their office in layout design and estimating until he retired in 1996.

On January 20, 1962, he married Arlene Olderog. From this union, they had three children.

Jim grew up in the Presbyterian Church and was baptized on March 2, 1952. He became a member of First St. Paul’s Lutheran Church in Hastings, NE in 1962 where he served on the church council for a number of years and on the property and building committees. He played a part in the planning of the new addition. He enjoyed singing in the Chancel Choir. He was a Mason and a member of Hastings Lodge No. 50. Jim also enjoyed his aviation magazines, books, and shows. He loved spending time with his four grandchildren, and seven great-grandchildren later in life. He had a tender heart.

To order memorial trees or send flowers to the family in memory of James "Jim" "Gus" Gustafson, please visit our flower store.