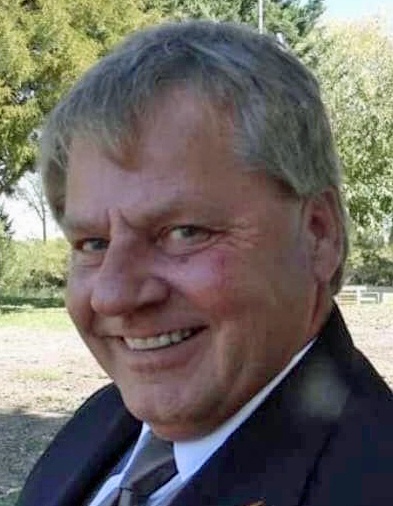 Rosary will be 10:30 a.m. and Mass of Christian Burial will follow at 11 a.m. Friday, February 18, at St. Michael’s Catholic Church with Father Jeremy Hazuka officiating. Burial will be at Parkview Cemetery in Hastings. Visitation will be 9:00-10:30 a.m. prior to the rosary at the church. Memorials may be given to the family for burial expenses.

Jerry was born November 2, 1961, in Kearney, NE to Jerome Lyle Sr. & Jollietta (Boesch) Tillemans. He graduated from St. Cecilia High School in Hastings, NE in 1980. He briefly attended Hastings College to play football. The love of his life, Sharon Palmer graduated from Hastings High School in 1981 they married on August 15, 1981, at St. Michael’s Catholic Church in Hastings, NE.

Jerry and Sharon moved to Lawrence, NE where they purchased and operated Tilley’s Food Mart. During this time, Jerry was a member of the Lawrence Volunteer Fire Department. This would start his long love of being a firefighter. Jerry and Sharon had their first son, Stephen James Tillemans on September 30, 1984. Twenty-one months later they welcomed their only daughter, Kendra Joan Tillemans, on June 12, 1986. Jerry and Sharon decided to sell the grocery store and moved back to Hastings, NE. After moving back to Hastings, Jerry became a member of the Hastings Volunteer Fire Department while working full-time at Pepsi. Jerry and Sharon welcomed their second son, Drew Timothy Tillemans, on November 11, 1991. Jerry applied to Hastings Fire Department and started his professional firefighting career in May of 1992. Later he obtained his paramedic license in 2003, from Kearney State. He later moved on to Grand Island Fire Department in 2008. He retired from Grand Island Fire Department in 2010. While serving as a firefighter, he volunteered for the relief efforts after Katrina, volunteered in 911 biological weapon training, he was a Hazmat and EMT instructor as well.

He mentored several firefighters and paramedics. He was also a very skilled woodworker and built homes and renovated several spaces and projects. Jerry was a proud husband, father, grandfather, brother, uncle, and friend. He often said, “If you are going to do something, do it well." He was the most dependable, reliable, loving human being this world has the luxury to have. His family and friends will miss him.

To order memorial trees or send flowers to the family in memory of Jerome "Jerry" Tillemans Jr., please visit our flower store.