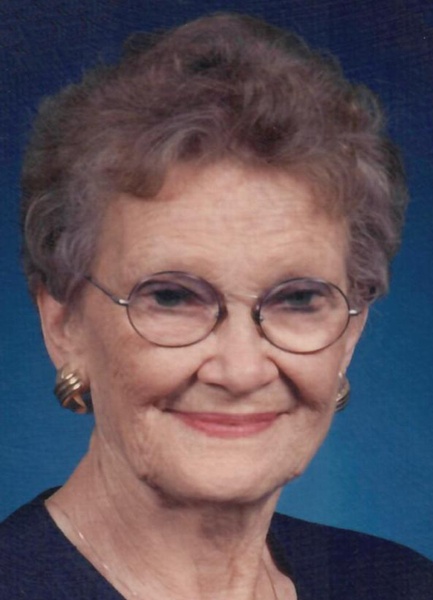 Services will be 10:30 a.m. Friday, November 5, at First St. Paul’s Lutheran Church in Hastings with Pastor Joel Remmers officiating. Burial will be at Parkview Cemetery in Hastings. Visitation will be 4-6 p.m. Thursday with family present at the funeral home. Memorials may be given to Mary Lanning Home Away From Home or First St. Paul’s Lutheran Church. The service will be live-streamed on Livingston Butler Volland Funeral Home’s website. To view the service you will need to go to Joan’s obituary and click the play button shown towards the bottom of the page.

Joan was born to Ivan A. and Signe M. Smith Wohlgemuth on the farm in Funk, Nebraska. Joan attended rural school district District #53 west of Funk and then graduated from Holdrege High School, with the class of 1943. She graduated from Immanuel Hospital School of Nursing in Omaha in 1947 and worked as a surgical nurse at the hospital in Holdrege. She moved to Hastings after her marriage to Russell A. Bramble on June 27, 1948, at Bethel Lutheran Church in Holdrege. She began working at Mary Lanning Memorial Hospital where she retired in 1989 after 41 years.

Joan was a member of First St. Paul's Lutheran Church and served as President of Women of the ELCA, was a member of the quilter's guild and cherished the friendships that she made with them and the many volunteers she spent time with at the church. Joan was also a Stephens Minister and developed close relationships with those she served. Joan was given an honorary state life membership in 1966 serving the Hawthorne PTA. She was active in Girl Scouts and served as Camp Counselor at Camp Augustine. She also served as secretary to the Hastings Hospital Authority No. 1 of Adams County, Nebraska. She also volunteered at Mary Lanning Hospital Auxiliary, Pulmonology Clinic and the Vital Signs Health Fair, American Heart Association, American Red Cross, and the Royal Family Kids Camp. In 1996 Joan was awarded the Edward D. Wilken Trustee Award from Mary Lanning Hospital recognizing her work in healthcare.

To order memorial trees or send flowers to the family in memory of Joan Bramble, please visit our flower store.