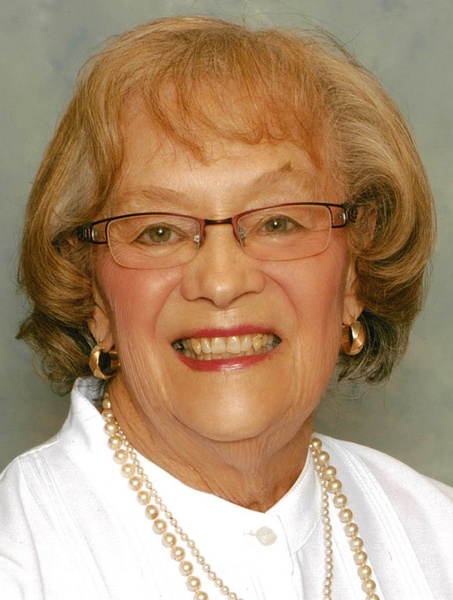 A Celebration of Life service will be held in Omaha at a later date. In lieu of flowers, memorial gifts may be given to the Omaha Community Playhouse or the Hastings College Foundation for the Brendon Doerr Scholarship. Private condolences may be sent to the family at www.lbvfh.com. Livingston Butler Volland Funeral Home & Cremation Center is serving the family.

Joanne Swerre Gilmore, was born to Swedish immigrants, Nils Marten and Emma Edquist Swerre. She graduated from Benson High School in 1947 and received her degree from the University of Nebraska – Lincoln in 1951. While a student, she was an active member of the Kappa Alpha Theta sorority and enjoyed a lifetime of friendships.  She also met and married Philip Gilmore on March 17, 1951.  Upon his return from the Army, they settled in Omaha, NE where they raised their two daughters, Karen and Anne.

Joanne was active in many civic organizations including the Junior League of Omaha, the Omaha Symphony Guild and the Omaha Community Playhouse.  She was a 50-year member of Presbyterian Church of the Cross and Happy Hollow Country Club.

Together with her good friend, they opened The Book House in 1978, a bookstore exclusively selling children’s books.

In retirement, she and Phil traveled extensively. Most memorably being at the Taj Mahal as the calendar flipped to the year 2000, a hot air balloon ride in California and visiting relatives in Sweden.

In November of 2019, she moved to the Heritage at College View in Hastings to be closer to her daughter.

Joanne is survived by her daughters, Karen (Roger) Doerr of Hastings, NE and Anne Jordan of Durham, NC, three grandchildren, Alison Doerr of Shawnee, KS, Nick (Emily) Jordan of Durham and Nina (Rob) Sloan of Indianapolis, IN, five great-grandsons, three nieces and a nephew and their spouses.

To order memorial trees or send flowers to the family in memory of Joanne Gilmore, please visit our flower store.