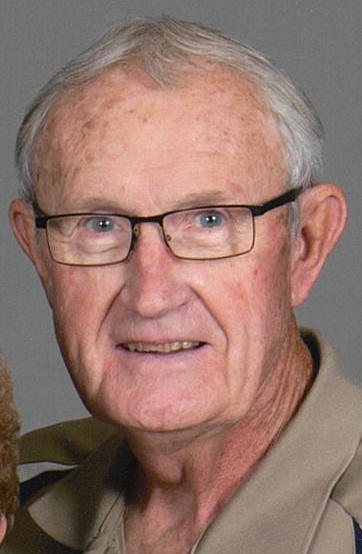 Private family services will take place at a later date with burial at Fairfield Cemetery. Visitation will be Friday, October 30, 1-7 p.m with family present 5-7 p.m. at the funeral home. In lieu of flowers, memorials may be given to Kenesaw Public Schools Foundation. Private condolences may be sent to the family at www.lbvfh.com. Livingston Butler Volland Funeral Home & Cremation Center is serving the family.

Joe was born in Fairfield, NE, in a hospital that would later become the house in which he grew up. Joe was supposed to be born at Thanksgiving, but instead, he came in at 12 pounds on December 26, 1942. Joe was well-known for his athletic skills while he attended Fairfield High School, from which he graduated in 1961. Joe continued to participate in football, basketball, and track while he attended McCook Community College and then Doane College.

Joe graduated with a degree to teach history/social studies, which he was proud to do for 40 years. He first taught in Culbertson, NE, before moving to Kenesaw, NE in 1971 and eventually finishing his career there in 2005. Joe was not only a beloved teacher, but he was also known to be an amazing coach who truly wanted to see his students develop to their fullest potential. He believed in all kids, even if they didn’t believe in themselves.  In fact, Joe couldn’t walk through a shopping mall without repeatedly stopping to talk to former athletes, students, or fellow coaches.

Joe was one of those fortunate people who found, married, and spent the rest of his life with someone he always loved deeply. Joe started dating Charlene Bortis during their senior year of high school and was quick to tell her that he wanted to marry her. Charlene took his second proposal more seriously, and they were married on August 23, 1964. They enjoyed 56 years together, during which time they raised three children and enjoyed spending time with grandchildren.

Joe was an active member of his community, serving in various positions at St. Paul’s Lutheran Church in Kenesaw and also as a member of the Kenesaw town council. Joe was a lifelong Husker fan, trying his hardest to attend the first game of the season with his sons. Joe loved watching football games in order to analyze the plays. After he retired, Joe continued to help Kenesaw High School with his special talent for dissecting football plays and helping make plans on how to best defeat each opponent. Joe wrote poetry and also enjoyed reading, especially books about historical events or figures.

Joe loved his family and taught them the importance of taking care of your family. Joe never hesitated to help when he was needed. His grandchildren will always remember what a caring grandpa he was, and how quick he was to help them. Joe and Charlene often gave up their plans for several days at a time if they were needed to help out with grandchildren. Joe’s children, grandchildren, co-workers, friends, and many other people always knew they could count on Joe when help was needed.

Joe was preceded in death most recently and unexpectedly by his son, Mike Heckenlively; as well as his parents, Ralph and Alma Heckenlively; brother, Larry “Red” Heckenlively; sister, Sänie Davis; niece, Jan Mick; and several aunts and uncles.

To order memorial trees or send flowers to the family in memory of Joseph "Joe" Heckenlively, please visit our flower store.