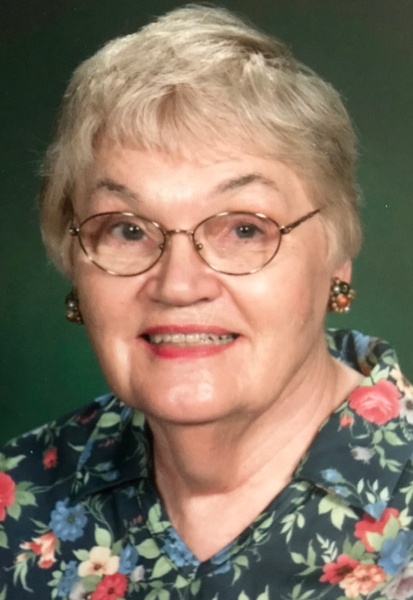 Hastings resident Joyce Ann Dickenson, 87, passed away in her home on July 23, 2020, to join her devoted husband of 62 years, Wesley, who left us on Easter of this year.

A joint memorial service for Wesley and Joyce will be held at a later date. There will be no viewing or visitation. Memorials may be given to the American Parkinson Disease Association at 135 Parkinson Avenue, Staten Island, NY 10305.

Joyce was born August 2, 1932, in Plainview, NE to Wendell and Delia (Deffenbaugh) Hill. Much of her youth was spent at Hill Brothers Drug store on Main Street where she helped at the soda fountain. In 1950 she graduated from Plainview High School and moved to Crete to study music at Doane College for a year before changing course to attend Lincoln General Hospital School of Nursing from which she graduated in 1954.  She and her nursing school classmates were committed to keeping in touch and circulated a package with letters and photos (the Round Robin) for 65 years. In 1955 she and two roommates moved to Hastings where she worked at Hastings Regional Center (then Hastings State Hospital). In 1957, as her roommates married and moved out, Joyce was considering other possibilities, such as joining the Navy, when she met and became engaged to Wesley Dickenson who was working at the Regional Center while attending Hastings College. They were married on December 22, 1957.

Joyce worked full time at St. Margaret’s hospital in Kansas City while Wesley continued his education at KU. In 1961 they moved back to Hastings where Joyce worked periodically at Mary Lanning Hospital and Hastings Regional Center in between raising their three children before retiring in 1990. She spent her retirement volunteering as a tutor of English as a Second Language at Hastings Literacy Program, singing in YWCA Choralettes, and participating in church groups at Grace United Methodist Church.

Joyce is most remembered by her family for her love and appreciation of people from different cultures, her delight in her grandchildren and great-grandchildren, her extensive vocabulary, her wealth of family trivia and medical knowledge, her reading of every book that came into the house and her beautiful singing voice. Wesley used to joke that he married Joyce to hear her sing Danny Boy. Her children claim that no one could sing Mother Machree quite like their mom.

Joyce’s family would like to extend special thanks to Julia Hernandez for helping to care for Joyce in her home for the last months of her struggle with Parkinson’s disease and dementia and the staff of Mary Lanning Memorial Hospice for guiding us with compassion and care through the final stage of this long goodbye.

Joyce was preceded in death by her husband; parents; and sister.

To order memorial trees or send flowers to the family in memory of Joyce Dickenson, please visit our flower store.