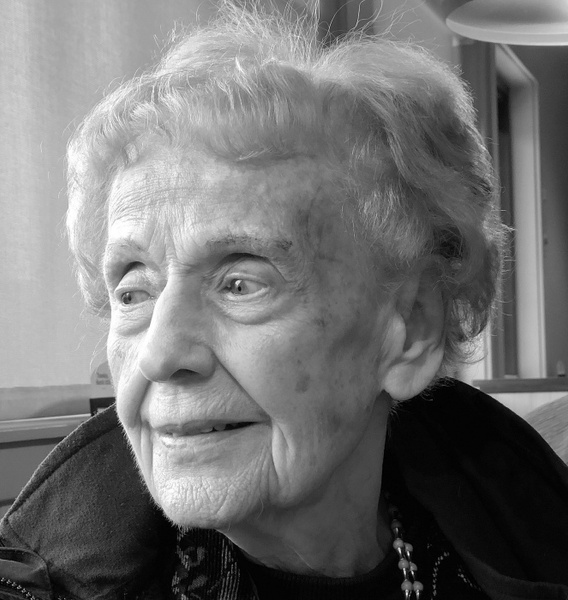 Katherine Ruth “Katie” Anderson (Batt) was 95 years old when she died on Friday, August 27 th 2021 in Lafayette Colorado.  Services will be held at Livingston Butler Volland Funeral Home in Hastings, Nebraska on Wednesday September 8 th , 2021, beginning with visitation at 11:00 am, followed by a funeral service at 1:00 pm, and then burial at Parkview Cemetery. Memorials may be given to the Alzheimer’s Association.

Katie was born on April 11, 1926 in Hastings, Nebraska to Gottlieb “Dick” Batt and Elizabeth Ruth McIntire.  She graduated from Hastings High School in 1944, and then worked at the Naval Ammunition Depot (NAD) outside of Hastings, where she met the love of her life, Richard Robert “Andy” Anderson, a US Marine born in Fremont Nebraska, who had served in the Pacific Theater during WWII.  They were married on May 23, 1947 at the First Baptist Church in Hastings, and spent 70 wonderful years together prior to his death on November 26, 2017.

After her husband graduated from Hastings College in 1951, they moved to Ames, Iowa where he performed post-graduate work in physics at Iowa State College, while she worked as a secretary for scientists at the Ames Laboratory of the Atomic Energy Commission. In the early 1950’s they moved to Tulsa, Oklahoma where Andy worked at Douglas Aircraft and North American Aviation.

Their son Scott was born in 1956, and son Steven was born in 1958. Katie was a wonderful, devoted mother to her children, doing early teaching, taking them to museums and activities, and instilling in them her love of music. Her sons remember a happy childhood of fun, creativity, and learning.  Katie was always interested in singing, and briefly had her own local radio show in Hastings where she sang popular songs.  Active in Bible studies, she was referred to as the “Root Christian” of the family, but she would certainly say that that title truly belonged to her own mother.

The family moved to Boulder, Colorado in 1966, where her husband worked at Ball Aerospace.  After her children were in their teens, Katie worked as a secretary for a real estate development company, and then returned to government civil service, working as a purchasing manager at the National Oceanic and Atmospheric Administration (NOAA) Laboratory in Boulder.

The family went on vacations to California, the southwestern US, the Black Hills, and many other places, building a love of travel, history, and exploration in their children.  A two-day personal visit to the Hollywood set of the Daniel Boone show in July of 1968 was particularly memorable to Katie and her sons.  In her later years, she greatly enjoyed visiting with her extended family, and cooking wonderful food for them.

To order memorial trees or send flowers to the family in memory of Katherine "Katie" Anderson, please visit our flower store.