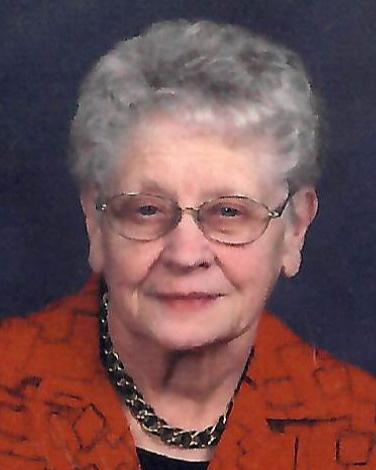 Rosary will be 9:30 a.m. and Mass of Christian Burial will follow at 10:00 a.m. Saturday, October 8, at St. Cecilia Catholic Church in Hastings with Father David Oldham officiating. Burial will be at Parkview Cemetery in Hastings. Book signing will be Friday, October 7, 1-3:30 p.m. at the funeral home. In lieu of flowers, memorials may be given to the family for a memorial to be established at a later date. The service will be live-streamed on Livingston Butler Volland Funeral Home’s website. To view the service, go to Lola’s obituary and click the play button shown towards the bottom of the page.

Lola was born June 14, 1933, on the family farm near Lawrence, NE to Herman J. and Agnes (Schroer) Menke. She graduated from Nelson High School in 1950. Lola married Vincent Pohlmeier. To this marriage they had six children. They later divorced. Lola then married Albert “Bud” Yetman; he preceded her in death on August 13, 1971.

To order memorial trees or send flowers to the family in memory of Lola R. Yetman, please visit our flower store.