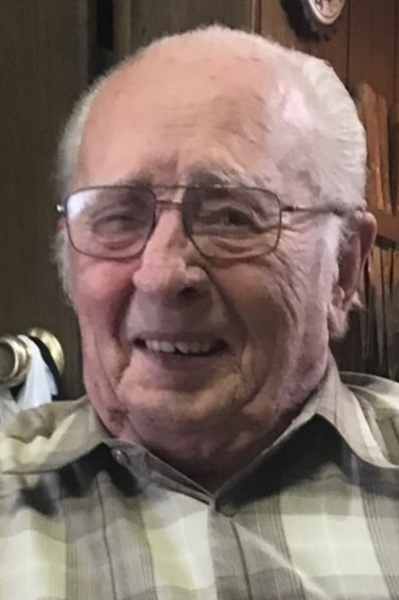 Services will be 10:30 a.m. Tuesday, June 21, at Faith Lutheran Church in Hastings with Pastor Paul Dunbar officiating. Burial will be at Parkview Cemetery in Hastings. Visitation will be 3-8 p.m. with family present 5-7 p.m. Monday, June 20, at the funeral home and one hour before the service at the church. Memorials may be given to the family for a memorial to be established at a later date. The service will be live-streamed on Livingston Butler Volland Funeral Home’s website. To view the service, go to Loren’s obituary and click the play button shown towards the bottom of the page.

Loren was born July 11, 1934, in Hastings, NE to Glenn R. and Clara M. Campbell. He graduated from Hastings High School in 1952 and the National Radio Institute of Chicago in 1956. Loren married Margaret Merrill on October 1, 1955, and in this marriage, they had two sons Michael and Timothy.   Margaret preceded him in death on December 31, 2006.

Loren started working at Spady Motors after graduation as an auto mechanic tech and also in the parts department.   He took those skills working with cars and was always ready to help those that needed help on their cars as well as help to teach his boys everything he knew about their many cars. He loved to help when the family was looking for new cars and would help them know what to look for in buying them.    He loved cars and seeing his boys and their cars.

He left Spady’s in 1955 and went to work for Central Radio Supply.  There he learned to use skills he learned in Radio college to become manager of the store and helped start one in Lincoln.  His boss asked him if he was interested in opening another store in McCook.  Loren and his wife decided they would and moved to McCook and started a store there.  When his boss passed in 1965 he and his wife Margaret purchased the store and L & M Electronics opened for business from 1965 to 1980. They distributed electronic parts to dealers in television and radio businesses.  They set up a route of a 150-mile area that they serviced.  He delivered parts and many times took his boys on deliveries teaching them a strong labor work ethic in them.  He told them that was important. He was a stern but loving father.  Through their store, he received the Zenith Sales Achievement Award for outstanding sales in 1973.  He won a trip out East to accept his award.

As the electronics changed with new technology and both their Moms and family living in Hastings they closed the store in 1980 and moved back to Hastings where most of their family was from there he went to work for Thermo King as a Grade 3 Evaporator Assembler.  He became the working line foreman in charge of production and quality in the assembly of transport refrigeration equipment.  He worked in other departments to gain knowledge of production to help in gaining his final position as a supervisor and retiring after 18 years in 1999 after receiving many awards for his hard work.

Loren and his wife did everything as a family.  Loren was an only child and when he married his wife he now was part of a big family of 13 brothers and sisters and spouses which he took to with great pride as he loved them all.  Loren and Margaret loved spending many trips over the years traveling with them.  When he became a part of this big family they all enjoyed spending time over the years with each other and letting cousins get to know each other,  and trips to Colorado visiting family there. They loved hosting many large family get-togethers for the holidays at their farm. He and his wife loved collecting antiques, especially clocks and Fenton glass.

Loren’s favorite pastime was teaching his kids camping and fishing as young boys.  He loved spending time with his grandkids as much as possible.  He loved being a Grandpa spending time with them which sometimes was every other weekend, especially in the summer he would pick them up and it was always an adventure before they took them home.

Loren and his wife bought a small piece of land where he gardened and raised Fred and Barney, a horse, chickens, ducks, and geese.  Grandpa showed the grandkids how to raise the pigs and he just never told them what happened to the pigs when they disappeared but there was a big Campbell reunion in 92 and a big roasted pig was served.  They hosted many family dinners as he and Margaret loved to cook and spend quality time with the family.  After he retired you would find him spending time with his boys and his grandkids and their activities fishing and camping and even went this past Memorial Day.  We can see him throwing a pole in the big sky with all his family up there.

To order memorial trees or send flowers to the family in memory of Loren Campbell, please visit our flower store.