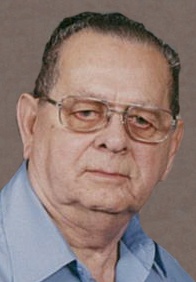 Rosary is 10 a.m. and Funeral Rite is 10:30 a.m. Monday, December 30, at St. Michael’s Catholic Church in Hastings with Father Jeremy Hazuka officiating. Burial with military rites by Hastings Military Honor Guard is at Parkview Cemetery in Hastings. Visitation is one hour prior to service at the church. Memorials may be given to the family for a memorial to be established at a later date.

Louis was born on November 22, 1926, in Lincoln, NE to Louis Lew & Leah (Koch) Helzer. He served in the U.S. Army and U.S. Army Air Force from February 15, 1945 to December 13, 1946. Louis married Florence Hilger on June 8, 1948; she preceded him in death on May 24, 2001. He worked at Ford Aircraft Tool Manufacturing Company in Hastings. Louis also worked for Kerr Plastics and retired from Sidles Automotive.

Louis was preceded in death by his parents and wife, Florence Helzer.

To order memorial trees or send flowers to the family in memory of Louis Helzer Jr., please visit our flower store.