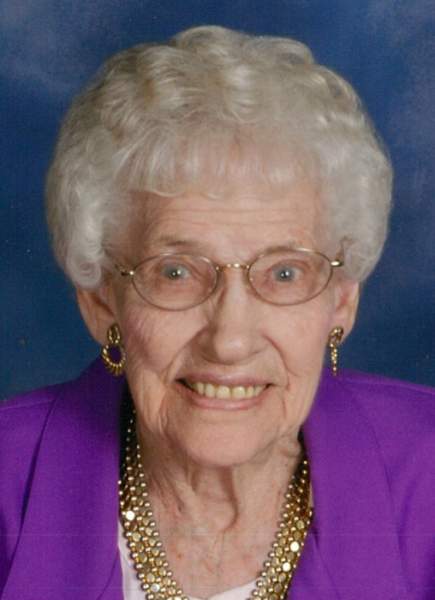 Service is 10 a.m. Monday, January 6, at Peace Lutheran Church in Hastings with Pastor Micah R. Gaunt. Burial will be at Glenvil Cemetery at 1:30 p.m. Memorials may be given to Peace Lutheran Church, Crossroads, or Habitat for Humanity. Visitation with the family is 5-6:30 p.m. Sunday at Livingston Butler Volland funeral home, and one hour prior to service at the church.

Lucille was born on February 2, 1922, to William and Grace (Casper) Philippi at Bruning, NE. She was baptized on February 19, 1922, and confirmed on April 5, 1936, at Trinity Lutheran Church of Bruning. Lucille graduated from Bruning High School in 1939. She attended Hastings College and taught school for 8 years.

She married Ward A. Fitzke on September 7, 1947, at Trinity Lutheran Church in Bruning; he preceded her in death on July 22, 2018. They worked together farming and built a farmstead west of Fairfield. They later built a home in Glenvil. They moved to Good Samaritan Village in 2012.

To order memorial trees or send flowers to the family in memory of Lucille Fitzke, please visit our flower store.