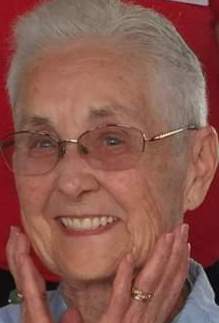 Hastings resident Madeline L. House, 88, passed away Wednesday, February 27, 2019, at South Padre Island, TX with Terry, Trudy, and Chad by her side.

Memorial services will be held at a later date. Burial will be at Frankfort Cemetery, Frankfort, KS this spring. Memorials may be given to the family for a memorial to be established at a later date. There will be no viewing or visitation.

Madeline was born January 14, 1931, to Iby and Dolly Wagner in Belvedere, NE. She attended school in Belvedere, NE. After graduating, she was united in marriage to Duane House. They were blessed with four children, Sherry, Coleen, Cindy, and Terry.

In 2015, she moved to Hastings, NE. to live with her son Terry, wife Trudy, and grandson Chad. Over 20 years, she enjoyed many trips with Terry and his family, including Hawaii, DC, the Dakotas, California, Florida, and Texas. The last four years she became a "winter Texan" with her son and family, enjoying the warm winters of South Padre Island.

Madeline was preceded in death by her parents; infant daughter, Cindy; husband, Duane in 1980; daughter, Coleen in 1988; and brother, Jake Wagner.

To order memorial trees or send flowers to the family in memory of Madeline House, please visit our flower store.