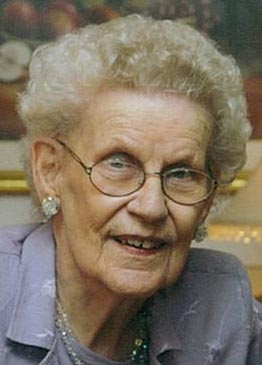 Services will be Thursday, June 27, 2019, 10:30 a.m., at First St. Paul’s Lutheran Church in Hastings with Pastor Andrea Paulson officiating. Burial will be at 2:00 p.m. at Geneva Cemetery, Geneva, NE. Visitation is one hour prior to service at the church. Memorials may be given to the Lutheran Church Women.

Margie was born on February 28, 1922, to Olga (Luschei) & Henry H. Heinz in Sutton, NE. She grew up in Sutton, NE baptized in the Lutheran faith on April 16, 1922, at Zion Lutheran Church in Sutton.  She graduated from Sutton High School in 1940. Margie worked at Harvard Air Base in Harvard, NE during World War II. She married Edward “Andy” C. Anderson on June 23, 1946, at Zion Evangelical Lutheran Church in Sutton; he preceded her in death on February 17, 2014.

Margie worked for Elgin Watch Company for twelve years. They bought their first of eight motels in Hastings, NE in 1958 and bought and sold several motels in numerous states. They purchased a home in Miami, OK in 1969. After retiring from the motel business, they fished on Grand Lake for several years until ill health forced them to give up their home and move to Leisure Living in 2010. In October 2013 they moved back to Hastings where they began their marriage. They had one son, Larry Anderson, who was adopted at age four.

To order memorial trees or send flowers to the family in memory of Margaret "Margie" Anderson, please visit our flower store.